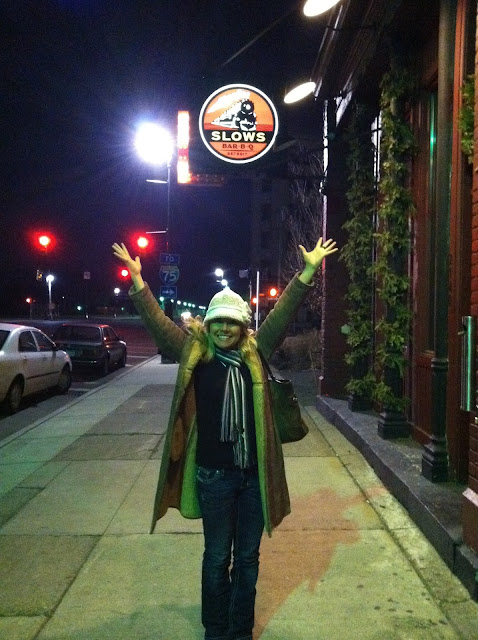 Yeah, I didn't sleep much this weekend and my 6AM flight this morning solidified the full-on nap I took the entire leg from LAX to Denver.  Unfortunately, our flight had mechanical difficulties and then we had jetway issues once we landed in Denver.  I had already started to plot how I was going to get to Detroit which involved two more flights, when I discovered there were several United Global Services passengers on my flight with the same itinerary.  If you watched the movie, Up In The Air, then you know exactly what I am talking about--that elusive card that gives you multiple flight benefits and carries enough clout to hold a plane.  So after running through the Denver airport huffing and puffing due to the altitude, I found out that they held the plane for us....okay, really just for them. I lucked out that they had the same itinerary.  Now you know that those secret airplane perks are all true and I just benefitted from them even with my little old Premier Elite card.

I am hitting the first press day tomorrow of NAIAS and I am sure I will tweet all of the updates happening from the show floor.  However, my first priority when I landed was eating at Slows, my favorite Detroit restaurant.  I stuffed my face with St. Louis ribs, Mac and Cheese, Mashed Sweet Potatoes, and a Brisket Enchilada. I know I am supposed to fit into a tiny dress on Thursday for the IAWTV Awards, but a girl has got to eat.

Have a great week, everyone, and don't forget to enter my 2012 Dress Challenge for Oscar Nominations.  The last day to enter is Wednesday, January 11th and the winner gets a $25 gift certificate!