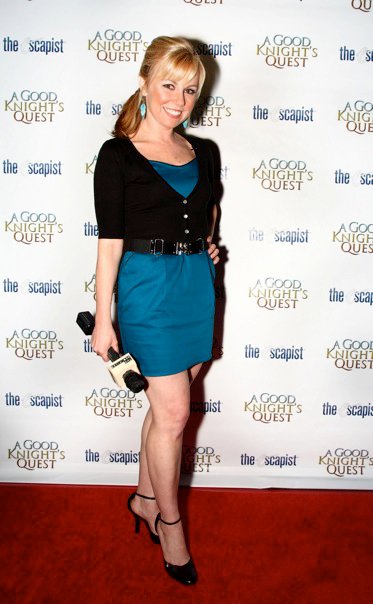 Kristyn Burtt is an IAWTV award-winning host, new media producer, and pop culture writer.  She began her hosting career with a children’s dance video teaching the world how to Electric Slide and Hokey Pokey.  Since then, she has moved on to more serious ventures with the pilot episodes of The Arena with Jesse Ventura on MSNBC and host/reporter stints with QVC, ShopNBC, and PAX. She covered the 83rd-86th Annual Academy Awards and the 65th Annual Tony Awards from Nominations to the Red Carpet for Starpulse.  Currently, she is the Entertainment Editor and Video Producer for Lifescript, a celebrity health website. She formerly worked as an entertainment correspondent for SheKnows Entertainment and NBC/Universal's, iVillage.com.  She also is currently co-hosting the So You Think You Can Dance recap show for Maria Menounos' new network, AfterBuzz TV.

For the last five years, she has co-hosted a live show for Toyota around the U.S. and she has interviewed the hottest celebrities on the red carpet for Focus Hollywood, Mingle Media TV's Red Carpet Report, and Dance Channel TV.  In July of 2009, she created the first online entertainment show focusing in on web series, “web celebs”, and new media called The Web Files.  The show was named the Best Original Web Non-Fiction show for 2009 by Clicker.com, Kristyn was nominated for a 2010 Streamy Award for Best Web Series Host, and Kristyn and The Web Files won a 2012 IAWTV Award for Best Host in a Taped Hosted Web Series and Best Hosted Taped Web Series.  Newstex and Fanboy Comics currently syndicates her pop culture blog, Red Carpet Closet.

Kristyn is an honors graduate from NYU’s Tisch School of the Art and she is a member of The International Academy of Web Television.