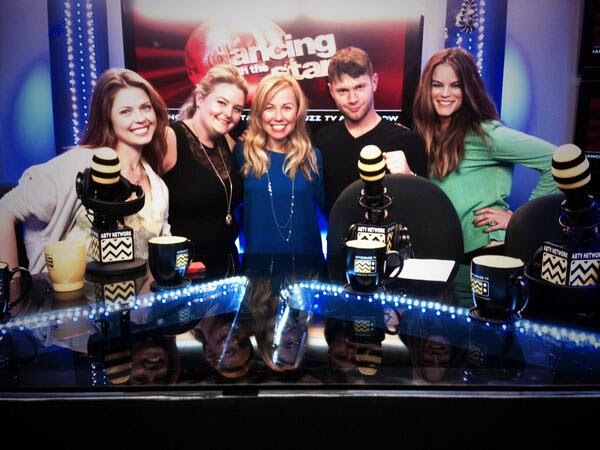 It was so great to be back in studio this week. I missed everyone! We had a bit of last minute shuffling going on with Julz having to rehearse (not-DWTS related) and Sasha Farber having DWTS rehearsal. It's okay though because we had the amazing Henry Byalikov in studio with us. He's been such a good friend to the show back to our early days in Season 15 with just Suri and me. Go back and watch an episode, it's sooooo different from the panel we have now.

The Party Anthem week was eh-okay to me. I am looking forward to Latin Week with Ricky Martin. Now that's what I call exciting! Drew exited this week which I was sad about since he made a huge impression on me personality-wise.

I called NeNe again for an exit next week, but a few people made a strong case for Candace (No! I'm not ready for her to leave yet.) exiting.


Who do you think will leave? Let me know in the comments below.
Posted by Unknown at 9:06 AM 4 comments: 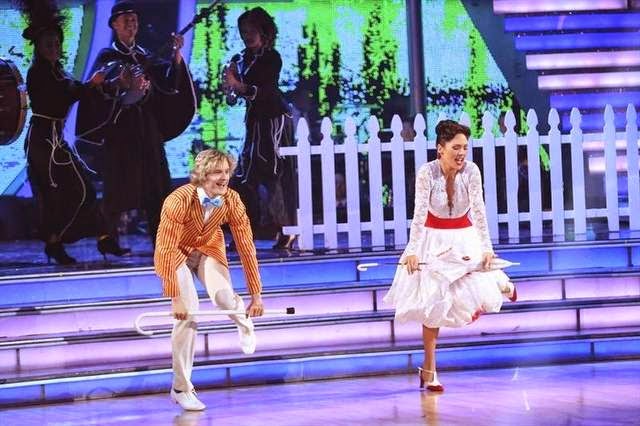 I am so sorry to have missed Disney Week on DWTS. As an avid Disney fan, I thought this was one of the best-executed shows from the costumes to the props, it was fun. Since I missed the AfterBuzz show this week because I was in New York for Hyundai's live 2015 Sonata launch (See photos here and here.), I thought I would give a few short thoughts on this week's show.

Opening Number: Mandy Moore did what she does best…use the space and choreograph for the camera. I loved Mark, Derek and Val on the steps. Their trio was my favorite highlight from the opening number.

Drew/Cheryl: While this wasn't his cleanest week, I love that he throws himself into each dance. What I adore about this season is that the cast is really likable. Drew has been one of the biggest surprises for me. Count me as a fan! (And how cute was the pep talk Cheryl gave him before the dance began?)

Charlie/Sharna: I don't care that he dropped the cane — that was spectacular! I am rarely a fan of props on DWTS, but the cane choreography was divine with the footwork. Sharna is one of the best choreographers on that show and she proved it with that number. Congratulations to Charlie for keeping up with such challenging steps. (And hello…he did a bumper with penguins--YES!) 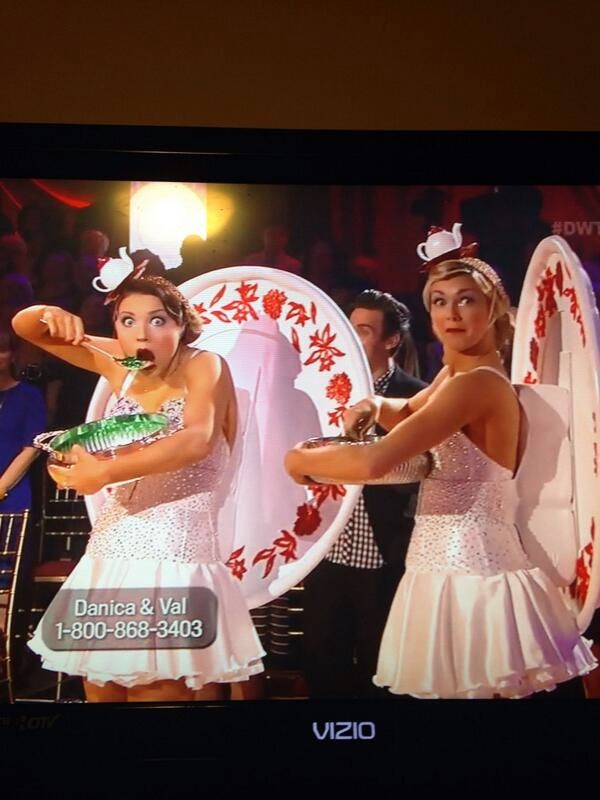 Danica/Val: I think this was her breakthrough week. She needed to really step out and distinguish herself since it's a talented group and we are halfway through the season. Val is one of my favorite choreographers on the show and this Quickstep showed off his skills nicely. I had to watch this routine twice though because the plates (AKA Lindsay and Jenna) stole the show.

Amy/Derek: Amy makes everything look so easy. This week, we learned how hard it really is for her. While she is primarily an athlete, she shines in her performance every week. This piece was beautiful in a very pretty and quiet way.

Witney/Cody: While I wasn't surprised it was the end of the line for Cody after Kristin Hope did her awesome Facebook-ology research. (His dance with Sharna was the fans' least favorite during the Switch-Up.) He had a really good showing in the Samba though. I don't agree with Donny at all. Cody is 17, he's not going to have a cheesy Disney grin. He went out on a good note and Witney proved she is a total star. Great first year as a pro!

NeNe/Tony: This was the perfect character for her and I loved what this pair did out on the dance floor. As for the package, they are two strong personalities and things will get heated in the rehearsal room. If you saw their emotion after the dance, you know they really like each other. However, Tony needs to take a constructive comment and roll with it. Carrie Ann shared that Derek's work with Nene helped her out. Any elite athlete or performer will seek out an additional coach for a big performance/event. It's no different in this situation. It only helped their case out on the dance floor. 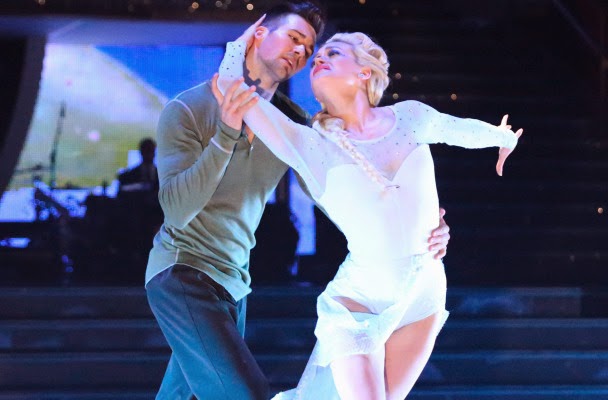 James/Peta: Hello, star lift! James has proven himself to be such a contender in a jam-packed fight for the Top 4. I'm not sure I would call this a perfect 10 performance, but it was darn close. (And hello…he needed a costume, it's Disney Week!)

Meryl/Maks: I am always wanting more from Meryl and I always go back to wanting Maks to add more content for Meryl. However, I'm starting to think that it's because Meryl makes everything look so darn easy. It's effortless and that's a hard quality to come by. It was a cute routine and I had no problem with Meryl's footwear in this situation…it gave her a barefoot look for the costume — I get it.

Candace/Mark:  I'm glad she had such a good week after being unfairly judged last week. I loved Mark as a crab! How did Donny not understand what he was doing with his hands? I have to say I am rooting for Candace. She's not going to be in the Top 4, but her positivity and her message that  you can be sexy and still covered up is kind of awesome.

Prediction for Elimination: NeNe--I think that package will hurt her votes a bit even though the producers probably upped the drama on their little tiff.

Amy Purdy Scoop: While I was in New York, I ran into the Toyota executive who was responsible for bringing Amy onto the Toyota sponsorship team. (I had seen him at the DWTS show I attended with my niece, but we didn't get a chance to chat.) He first saw her at the TED Talk back in 2011 and approached her after the speech. He is such a fan and Toyota is truly supportive of all of her endeavors. On the sly, he also told me, "That Peta girl is something, isn't she?" I had to laugh.

(Disclosure: I hosted a show for Toyota for five years.)

Let me know your thoughts on Disney Week in the comments below. 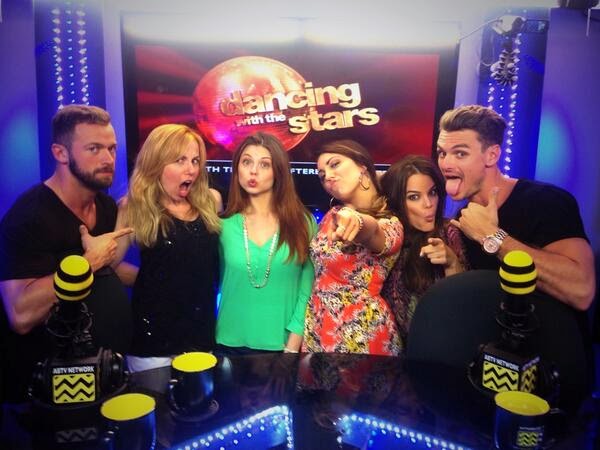 What a rowdy show! I hope you had as much fun as we did. It was a little crazy trying to get in all of our thoughts about Julianne Hough's judging, the Switch-Up, the low scores for Candace Cameron Bure and Macy's Stars of Dance.

Artem Chigvintsev and Jenna Johnson were so much fun. I hope to see Jenna back on the show when we kick SYTYCD back into high gear in late May.

If you missed the show, watch it below.

What are your thoughts on Candace's scores? Let me know in the comments below.

A Response to the Naysayers Regarding the DWTS Switch

#DWTS @DancingABC * @KristynBurtt I really have a HUGE disapproval of people who BRAG about how "I KNOW BUT I CAN'T TELL little ole you"
— LePrimm (@LePrimm) April 2, 2014

I normally don't reply to tweets like this, but this season I know I have more followers and some people may not know how I operate. I feel like it's fair to at least explain where I am coming from. While I may host AfterBuzz TV's DWTS show, my day job is working as an entertainment reporter. I like to sniff out the inside scoop. I've done that a few times with DWTS like here and here, but I always make sure to double check my sources. If I can't cross-reference it, I don't report it. You know I will always spill the beans when I can.

Yesterday, before we went live on our Week 3 show, some information about the Switch came down to us. I was stunned. Knowing how hard many of you worked on voting for the best possible matches for your favorite celebs and pros, I felt that the results negated all of your work. My source asked me not to reveal the names and I respected that wish. I would never put someone's job on the line for scoop.

We hinted about that voting issue at the end of the show this week. Instead of being vague about what we said, I clarified as much as I could via Twitter. I like transparency and I try to deliver it as much as possible. While I would have loved to have given you the list, I couldn't. I just wanted all of you to be prepared for the new partnerships. I don't mind the idea of the switch for one week at all, but the execution kind of stinks. As fans of the show, you deserve better.

This gives you a better idea of where I am coming from, but my integrity and #TruthInReporting hashtag means a lot to me and my career.

A big thanks to DWTSGossip and PureDWTS for their support and for having my back….working together is always way better than working against each other. I wish more people would adopt this philosophy. 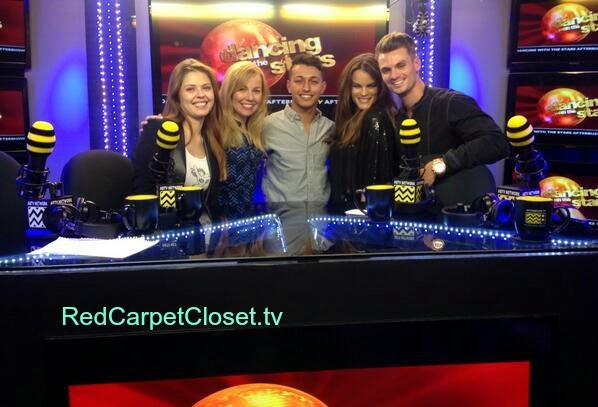 What a hot show! I thought that the Sean Avery controversy was going to be our big topic. Nope, the Switch info came down late in the afternoon and my mouth dropped a bit when I heard the names of some of the couples. I know that PureDWTS did a lot of research to track the partnerships and I certainly saw those same names in my Twitter feed. When those names didn't match up, I knew that something was up…the producers know they screwed up the Twitter vote.

Thank you to Paul Karmiryan for joining us and adding his insight to this week's show. I loved that he, Anna and Julz didn't agree on everything this week. It proves how personal art can be and as viewers we all share different opinions on what we saw. As a panel, we don't always agree and that's what I love about doing the DWTS AfterBuzz TV show.

If you missed the show, watch it below.

Let me know your thoughts on the Sean Avery controversy. Dumped from the show or voted off?