I cannot believe I'm going to do this.  I just joked about it in this post, but I am hearing rumblings in and around Hollywood that Jennifer Aniston is indeed pregnant.  It's a hard one to grasp because the tabloids have made this poor woman pregnant so many times over the last decade that she would put Octomom to shame.  Some recent clues include Jen canceling an event appearance at the last minute (And she's known to be one to honor her commitments, something that is rare in this town.) because she had the "flu".  These excuses can easily be explained, but I've now heard the rumor from two reliable sources.  So, this is officially my next Baby Bump Watch 2012 pick.  Do you think I am crazy or do you think that she's going to have a baby with Justin Theroux?  Only time will tell, but let me know how crazy you think I am in the comments below, on Twitter, or on Facebook.  (And remember, I correctly guessed Reese and Megan this year!) 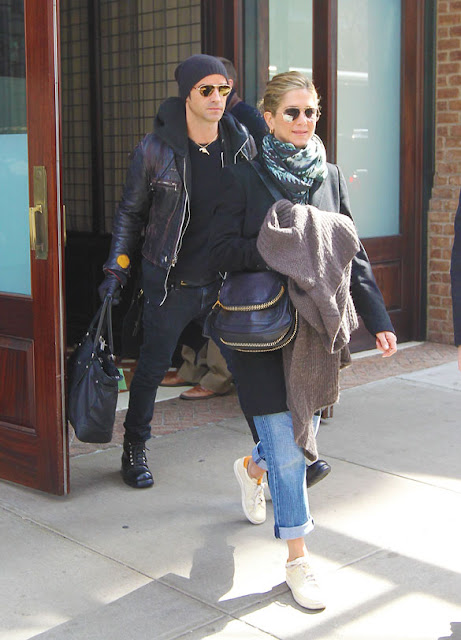 A tell-tale sign of being pregnant and hiding the bump from the paparazzi or just carrying her sweater over her arm?  You decide.

You have two more days to enter my Gift Bag Giveaway.  Click over here for more information and the entry form.

UPDATE:  So, I went to sleep last night and woke up to find this post had exploded with traffic from a particular forum.  First of all, welcome to my site!  Second, I wouldn't make up a rumor just to have hits on a post.  I've had enough credible evidence passed along to me that gave me reason enough to write about this.  I can't promise that it is 100% accurate, but if I am wrong, I will also post that information as well.  I'm not a gossip site, so there is no reason for me to print every rumor and Hollywood tale I hear from the red carpet.  (You have to take me out for a cocktail to hear those stories.)  If you have any questions, you can contact me here or hit me up on Twitter, Facebook, or the comments below.  Thanks!

UPDATE: May 18th:  Everyone is asking me the same questions, so if I have any news to report, it will be posted here.  I am looking into all of this, I promise, but I am not going to report anything until I know it is accurate and factual.  Have a great weekend, y'all!

UPDATE:  June 2nd:  Hi! I've read all of your comments and emails and I still have not official news for or against an Aniston pregnancy.  I do have a couple of things to mention though:  one of my sources has gone completely silent which can mean either they are completely right and need to keep quiet or they are completely wrong and they need to keep quiet.  That doesn't help our cause any.  I can confirm that as of yesterday, Jen is slated to walk the red carpet with Justin Theroux (Meaning they are both attending. I'm not saying they will be hand-in-hand on that red carpet.) tomorrow at the MTV Movie Awards.  Will that give us any clue?  Maybe.  However, after I had called a bump watch on Reese Witherspoon, she paraded around like this and then I was in the same room with her for our interview and both times I didn't believe she was pregnant......until it was 100% confirmed two and a half months later.   So this original post was on May 14th.......patience is key here.

I won't confirm or deny anything until I have the facts.  The first trimester for any woman is a sensitive time, sometimes people have miscarriages, many celebs are waiting until their 4th or 5th month to confirm when they are actually showing, or maybe she isn't pregnant....there are so many factors.  Remember, people do work through their pregnancies, so being on a movie set doesn't confirm or deny anything. Sarah Jessica Parker had racy sex scenes with a baby bump during Season 4 of Sex and the City.  We're The Millers is still considered a film in pre-production, but everything I am hearing leads to a late June or early July shoot which includes Jennifer a part of that cast. So, the news is still "Is she or isn't she?", but I figure we will know the truth very soon.   Have a great weekend!  KB

**People are now asking me how do you know she will be at MTV Movie Awards with Justin tomorrow?  Please remember:  I am an entertainment journalist, I work with PR, agents, managers, studios, etc, I will NEVER reveal my sources....BUT if you followed my blog or my social media pages, you knew I worked with MTV twice this week:  once here and then here. I'm interested in telling you the truth, not tabloid lies. If I hear that information changes, I will let you know, but this information about her appearance was true as of Friday night, June 1st.  Now, back to my weekend...I have to interview the cast of Rock of Ages today.....and no, I am not interviewing Justin.  I adore you guys, you are the most dedicated fans Jen could ever ask for and you sure keep me on my toes. :) **

**June 3rd UPDATE: Hmmm, I had someone working the show check on seating for tonight's show.  There is no Seating Card for Aniston.  I also found B-roll of the Seating Cards and I do not see one for Jen or Justin. Watch the footage and see if you agree.  You can watch here.  I'm working hard to find out what is happening before the show begins.** 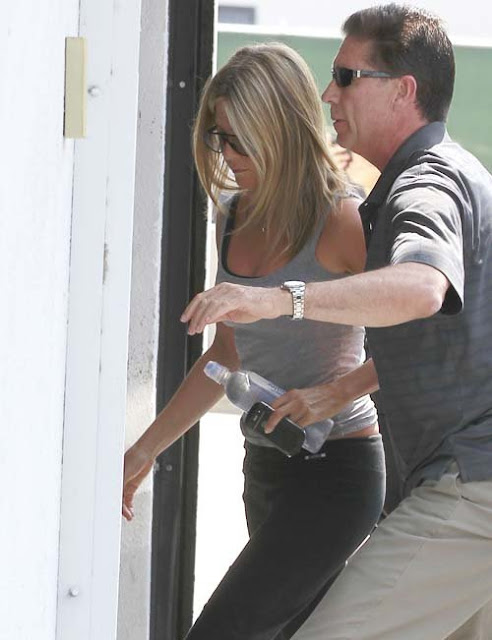 I know you have all seen this June 1st photo.  Pregnant or not pregnant, it doesn't matter.  That's a hot body!  I'm working out even more tomorrow. 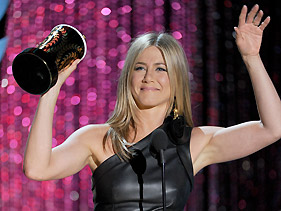 Best On-screen Dirtbag Winner at the 2012 MTV Movie Awards.  Congratulations, Jen! (And thanks to my original source for being accurate about Jen.  I was wrong about Justin, but I am glad to see Jen was there.)
Photo: Kevin Winter/ Getty Images

June 17, 2012:  I don't have any updates on Jen today. However, I thought we should give a little love to Justin and Rock of Ages.  I personally loved the movie.  You can see some of my interviews with Catherine Zeta-Jones and Julianne Hough here.   My Malin Akerman interview became a part of our iVillage Father's Day piece here.   Did you see the movie?  What did you think?  Let's discuss the film over here. (I don't want to confuse it with our Jen post.)

June 26, 2012:  Is our Baby Bump Watch also including an Engagement Watch?  Take a look at my post here.

July 19, 2012:  I know we are nearing the time when the question will be answered:  Is she or isn't she?  I've had so many questions, comments, and support from you guys, I really appreciate it!  It's hard to keep up with answering all of the comments plus working the rest of my entertainment reporting gigs, so I've decided to do something fun.  How about a live webcast?  I will answer as many of your questions and comments as possible.  If I can get 10 of you to respond that you want to do this, then I will do it on Monday, July 23rd at 6:30PM PT/9:30PM ET for 30 minutes.  If you want me to do this, comment below.....but remember, I need at least 10 responses by the end of today to make this happen.  Ready, set, go!

July 20, 2012:  The Spreecast is officially happening!  If you have questions, make sure to RSVP and get your questions in here.  The live chat will happen Monday, July 23rd at 6:30PM PT/9:30PM ET for 30 minutes.  I will be covering the entertainment news of the day and answering your Aniston questions that I haven't been able to get to lately because I have been working.  See you on
Monday, this should be fun!

July 24, 2012:  Thank you to everyone that joined me last night for our live chat.  That was SO much fun.....especially once I stopped talking to myself and learned to turn on the "Start" button!  If you missed it, the archive is here.  We are going to do another one next Monday.....same time, same place.  I hope you can join me.  I hope to make this a weekly destination for all of us to chat about entertainment news.....and the mysterious baby bump.  I interpreted my source's info that she isn't pregnant anymore, but I think a lot of you disagree with me.  I am fascinated by how this is playing out.  We have a lot of set photos to look at this week, don't we?  Thank you, guys.....this has been so much fun to interact with you!

July 29th, 2012:  Remember, Monday is another LIVE broadcast at 6:30PM PT/9:30PM ET.  All of the information is here.  I also have several of your email
questions that I will answer and address.  I will see you tomorrow!


July 30, 2012:  I made an official call on the Baby Bump Watch on the show last night.  Here is what I said:  Spreecast archive

I keep getting emails that comments aren't going through. They are.  We have two pages of comments going (YAY!), but it is too long to post on one page.  If you see the photo above, there is a "LOAD MORE" button below the comment box.  Click that and you will find your most recent comment on the next page.  Thanks for being so awesome and coming here to chat! 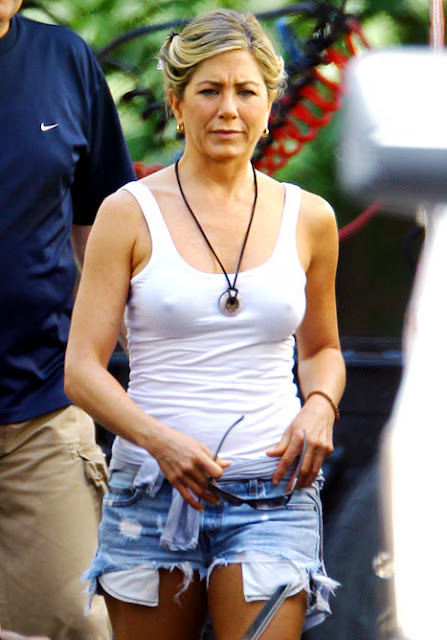