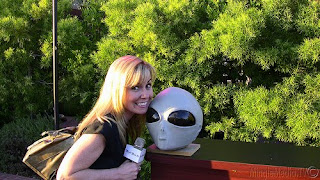 On Thursday night I headed out to the Castaway in Burbank for the 36th Annual Saturn Awards honoring the year's best in science fiction, fantasy, and horror films.  It proved to be an interesting night with Mingle Media TV:  sexting, flirting, and Spock blocking.  Let's take a look at a few of my favorite interviews and photos from the evening.

We will start with the downright bizarre with Billy Dee Williams.  I don't know about you, but his iconic turn as Lando Calrissian in the Star Wars trilogy is enough to get my jaded red carpet heart excited.  Well, I don't know if Billy was hitting the Colt 45 hard in the limo, but this interview was, um, interesting.  It starts right off the bat with sexting on the iPhone 4:

Saving the day was the incredibly sweet Mark Pellegrino who played Jacob on Lost.  Now, I honestly didn't ever watch the show, but my boyfriend was obsessed with every detail surrounding it.  I, on the other hand, considered myself a Lost widow on Tuesday nights.  However, Mark kindly indulged me in a photo for my boyfriend and made a friend for life in me.  You can see our interview here. 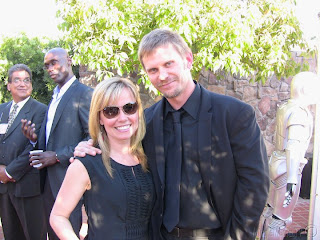 Leonard Nimoy stopped by as well that night.  He looks great, in shape, spry, and his wife is a little spitfire too.  We managed to share an interview with the Space network out of Canada, but we were "Spock Blocked" from our own individual interview by the persistent creator of an upcoming animated film.  I won't name him, but you know who you are.  If a star of huge wattage walks on the red carpet, step aside, the media outlets will always get back to you, but we need to get the money shot.  It truly is a food chain in Hollywood and when you "Spock Block" us from getting our individual interview, we don't interview you afterwards.  (Thanks to JD Piche for coining the term "Spock Block" which I happily stole for this post.)
**Update**  We have the "Spock Blocked" video for all of you to enjoy.  See how it all unfolds: 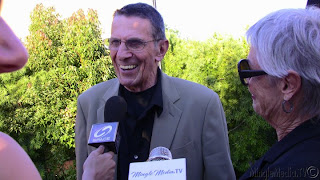 Finally my favorite interview of the night, James Remar.  He was there representing Dexter, while I wanted him there representing Sex and the City.  I shamelessly flirted with him and I made him blush.  A successful evening on the red carpet!

You can catch all of the interviews including Lance Reddick, Shaun Toub, and Malcolm McDowell on Mingle Media TV and all of the photos from the evening on Flickr.