Behind the Scenes of Choreographers in Media 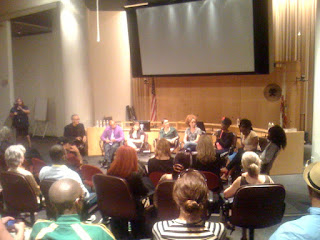 As many of you know, I cover a lot of events, red carpets, panels, and conferences for my job, some events are more exciting than others.  When I come upon the annual "Choreographers in Media" panel each year, I get giddy.  As a former dancer, it's a thrill to hear about the history of dance and where the art form is headed.  That is what the panel, sponsored by Dance Camera West, offers each year.  Last year, the panel offered a powerhouse of top choreographers like Maguerite Derricks, Chucky Klapow, and Tyce Diorio.  It was a bittersweet event because Chucky kept us all glued to our seats with updates on Michael Jackson's "This is It" tour which he was rehearsing with Kenny Ortega down at the Staples Center.  Less than a week later, Michael had passed away.  His contribution to dance and choreography is not forgotten as Michael was a huge topic of conversation at this year's panel including Lula Washington, Kim Blank, Chuck Maldonado, and Larry Billman as moderator. 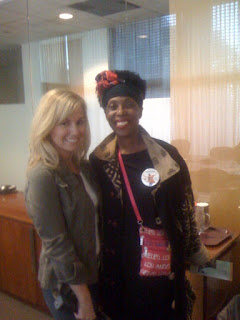 I had the opportunity to interview all four of them individually for Dance Channel TV and they each brought something exciting to the panel.  Lula is a firecracker!  I am thrilled to see that modern dance is getting its due in mainstream entertainment and it doesn't get any bigger than James Cameron's Avatar.  The challenges presented to Lula were often on the technological side, but she created four wonderful ballets for the movie all while using motion capture.  While we didn't get to see those full ballets onscreen, I am hoping Mr. Cameron saves it for the extras on the DVD. 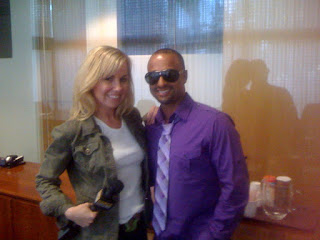 Chuck represented the male point of view on this panel.  As a choreographer, he is working on his 20th film in less than a decade.  That is truly an impressive number because he has only been in LA since 2001. His speciality is stepping and he gave DCTV a little highlight of his signature move.  If you want to see what he is truly capable of, rent Stomp the Yard.  It is a choreographic feat in terms of stepping sequences.  I also like that Chuck talked about the importance of a choreographer on set because a director is not trained to see movement the way a dancer is trained.  He talks about all of the possibilities for a choreographer on set during his interview. 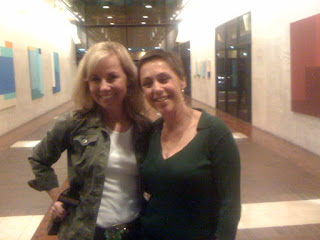 And then there is Kim.  As a dancer working in the 1980's, she was there for the MTV explosion back when music videos were a pioneering art form.  Michael Jackson was king and musical artists created stories behind the music.  It was interesting to hear Kim say the Thriller video was considered "a great gig" at the time.  She was young, so she was in awe of the people she was working with MJ, choreographer, Michael Peters, and legendary dancer, Gary Chapman. She didn't realize she was going to be a part of pop culture history, the music video that sent me rushing home from school each afternoon.  It's hard for this generation of dancers to understand that we went into a frenzy anytime the video was played because MTV barely register on the pop culture radar anymore.

Larry proved to be a terrific moderator for this panel since his vast movie and television choreography knowledge validates the importance of dance in all artistic mediums.  He spent years at Disney Live Entertainment and he talked about the cultural significance of the Mouse in dance during the variety show years heyday.  The Kids of the Kingdom dancers performed with Anne Margaret, Bob Hope, in front of Presidents, and at the Super Bowl.  It was one of the best gigs in the industry at the time.  While the landscape has changed, he still believes that Michael Jackson has the most influence on choreography even in 2010.  If you are interested in learning more, Larry has a terrific book called Film Choreographers and Dance Directors. (link posted below)

Two important notes also came out of this panel.  One involved the importance of mentoring.  We lost significant choreographers in the 80's from Michael Bennett to Michael Peters to Bob Fosse.  Those great losses also created the "lost" years in dance.  There were years without a driving force in dance and innovations in the industry.  Each of the choreographers on the panel talked about the importance of teaching and mentoring young dancers who are interested in working behind the scenes in TV and film.  As a choreographer in Hollywood, you need to be a producer, a director, and an artist all at once.  They don't want to lose the momentum that dance currently has, so they are working hard to raise the next generation in the industry.  Finally, the YouTube revolution has also changed the face of dance.  For an artist, you can't be one dimensional to succeed, you need to find your place in multimedia.  It can be a challenge, but technology is playing an important role in all art forms.

If you missed the panel, check out all of the highlights from Dance Channel TV:

PS LA Dancers: There will be another panel coming up on June 29th at SAG from Career Transitions for Dancers called :  Dancer's Roundtable: What is new and innovative in dance today?  You can find all of the information here.

Posted by Kristyn Burtt at 9:54 AM