Behind the Scenes of SOLO the Series Red Carpet Premiere 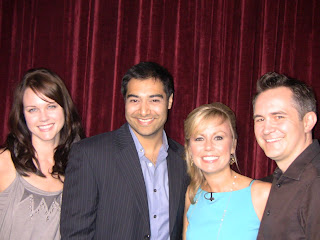 As the days dwindle before my vacation, I want to make sure I capture all of the excitement surrounding the SOLO the Series premiere:  a packed house, lots of giveaways, and a long awaited series screening. We were back at Cinespace which has become one of the "go-to" locations for web series premieres.  You might even recognize the background from the Compulsions episode.  We were able to grab the cast right before they headed into the screening room to give us their thoughts on the series and what item they would like to have with them if they were stranded in space.  SOLO the Series, created by Jonathan Nail, follows the journey of man stranded in space after his reality show is cancelled and that is when the hilarity really begins. 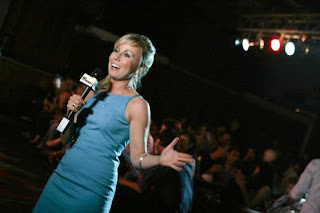 We were able to interview some familiar faces to the web series landscape from Michele Boyd of The Guild to Brittney Powell and Tom Konkle of Safety Geeks: SVI.  What?  You don't remember seeing a full interview with Brittney and Tom in our episode?  I joke that they are on The Web Files every week, so I don't want to disappoint you.  Find out about their participation in SOLO the Series in this Red Carpet Closet extra:
The one person I was really excited to interview was Jay Caputo who plays Jack Spratt, the reality show producer whose behind the scenes shenanigans with the Japanese mafia get them all into trouble.  If you are a frequent reader here, you know I am an uber-gymnastics geek.  Well, Jay was on the National team as an elite gymnast, a successful NCAA athlete, and he participated in the 1992 Olympic Trials. Impressive, right?  Well, Jay was not so impressed with my excitement.  Watch my awkwardness unfold onscreen:
As for creator, Jonathan Nail, it was exciting to watch his big night.  This show has been a long time in coming and he did a great job with the premiere.  He built on the momentum with a packed house of supporters, he offered up fantastic prizes for a raffle to help raise money for the rest of shooting season (And boy, were there some excited winners--Hello, A Good Knight's Quest table.) and belief in the project permeated the room.  I think we all felt that we want Jonathan, the cast, and the show to succeed.  This truly was Jonathan's night and his pet project.  He had a lot of support behind the scenes too with web series power couple (Okay, I just termed that, but I like it.), Allison Vanore and Rob Gokee.  I finally met Allison after months of communicating on Twitter.  After meeting her in person, I understand why she is in demand as a producer:  confident, smart, and really sharp.  So, book her now if you want to work with her, I have a feeling it is onwards and upwards with her career. Rob is familiar to many of you from our Web Files Buzz episode back in March.  He scored a majority of SOLO the Series and he is a great example of utilizing social media to market and gain new clients. 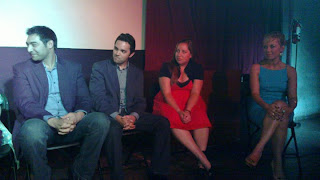 I was also grateful to be asked to moderate the Q&A after the screening. One of the most important ideas that came up was casting in a web series.  It has been a common occurrence to cast your friends in all of the roles.  It is a great idea to band together to create new work, but sometimes you wind up with someone that may be miscast or doesn't have the acting chops of everyone around them.  Well, Jonathan Nail brought in casting director, Laurie Records, to help with SOLO.  It adds another layer of professionalism to the production and by holding auditions, you might find an actor who brings new meaning and layers to the words you have written as a creator.  It's an interesting thought, so if you are able to set aside a budget to hire a casting director, you may see your work take shape on levels you might not have realized otherwise.  I point it out because it's just another little morsel to nibble on while your next web series idea is brewing.
I know a lot of you are waiting for the big debut of SOLO the Series and that day is coming soon. Be sure to check out Episode 1 on July 6th at WatchSolo.com.  Congratulations to the cast!  It truly was a magical night.
Enjoy our episode, I think you will hear about a lot of different aspects to the production from shooting on the small set with Dirctor of Photography, PJ Gaynard, to playing a robot, PHAL9000, with actor, Jason Burns.  If you want a tour of the set, see our Web Files Buzz episode with Jonathan from February.  Now, check out all of the action from the red carpet premiere:
Photo #2 Courtesy of Jonathan Nail
Photo #3 Courtesy of Brittney Powell
Posted by Kristyn Burtt at 8:07 AM