Behind the Scenes of The Web Files Buzz, Episode 5 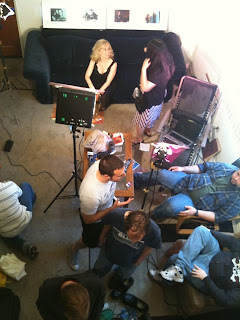 Another episode of The Web Files Buzz is here and I think I have the biggest hair ever in this episode.  I'm not kidding.  I think it was the perfect element to battle ghosts and zombies on our set visits to Bumps in the Night and Night of the Zombie King from the Gold crew.  There was enough hairspray to ward off any paranormal activity.

Melissa Anchondo making my hair as BIG as possible for the shoot that day. 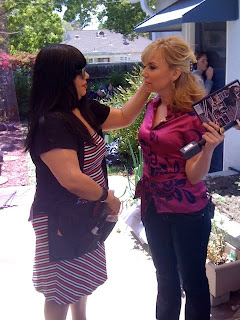 Our first visit that day was to the Bumps in the Night set with Emmett Furey, John Reha, and Greg Benevent We have talked about a shoot with them since the A Good Knight's Quest premiere back in February.  It took a long time to schedule, but we managed to get them in and get the guys in character for a fantastic Ghostfacers versus Bumps in the Night throw down.  Who do you think would win the face-off?  Also, I love that the blue couch that we were sitting on is from Craigslist and plays a hilarious role in the series:  is it haunted or just a reminder that Craigslist can be creepy?  One thing I wish I had mentioned during the interview was that they are using a variety of guest directors this season.  I think it adds an interesting element to the series by showcasing different director' takes on the show.  The week we were there, it was Rudy Jahchan's turn.  You may recognize the name from the Streamy-nominated and Web Files featured show, A Comicbook Orange. (In fact, their episode remains our highest viewed show for 2010.)  Rumor has it that Rudy may direct another episode in the near future, so be on the lookout for his shows and check out another episode of Bumps in the Night directed by After Judgment's Taryn O'Neill and guest starring The Crew's, Ariel Lazarus.  Bumps is definitely a smaller web series deserving more eyeballs, so go show your support and check out their show. 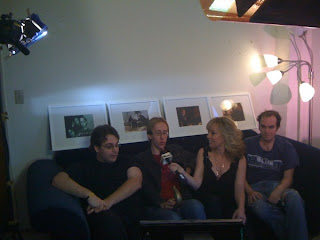 From ghosts to zombies, we headed just down the street on this prolific web series weekend to the set of Night of the Zombie King from Gold creator, David Nett.  These mini-episodes featuring the character Jaz from season 1 of Gold, are going to help tide the fans over until Season 2 is shot and released.  Joining James Lane (Jaz) are a few familiar faces including Stephanie Thorpe of After Judgment as Jaz's high school sweetheart and Maxwell Glick of lonelygirl15.  Adding to the excitement of the series, is the release of the Season 1 DVD of Gold. Sales of the DVD will go toward producing a Season 2, so get out there and support the show.  I was lucky enough to get an advanced copy of the DVD which features extras like commentary on each episode from the cast and crew, an interview with Cricket Lee of GirlGamer.com, and a mini-episode not seen before.  I think it's just enough to excite fans for the upcoming second season. 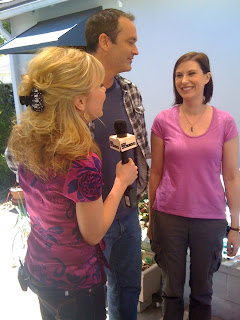 And one final note, I will give a prize to the first person who correctly answers this question:  My shirt seen in the photo above was also worn by another actress in a 2009 interview on The Web Files.  What show were we interviewing?  First correct answer in the comment will win some fantastic prize from my collection of goodies.  Ready, set, go.........
If you missed our Web Files Buzz episode, watch it below.  We will see you tomorrow with an interview with the new Backyard FX host, Zack Finfrock.
PS  I received amazing PR materials from Jenni Powell of Bumps in the Night and David Nett of Gold before my set visit.  It really is an important component to any show, make sure to read my tips on Publicity and Web Series or ask your fellow content creators for some help.  This type of professionalism creates a stronger foundation within the web community and beyond.  Thank you both!  It made my job easier that day.  (And if you want to see a spot-on interview, watch David.  He mastered the art of the interview, promoted his show, and his section needed very little editing in post.  Woo hoo!) 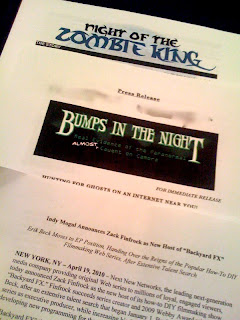