An Academy Tribute to Sophia Loren 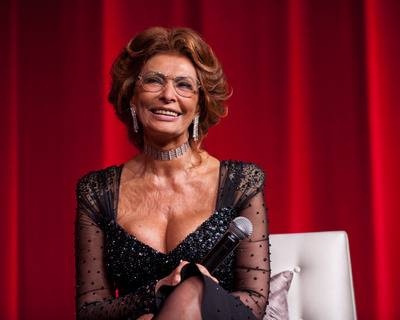 Last night was one of those evenings where you pinch yourself and think "How the heck did I get here?" I ran into actresses Debi Mazar and Eva Mendes on the way to the restroom to kick off the night, but didn't sink in until Tom Hanks said to the audience in a taped message, "How lucky are you to be in the same room as Sophia Loren?".  The word lucky doesn't even begin to describe it.  Sophia was being honored last night by The Academy of Motion Picture Arts and Sciences for her 50-year contribution to the film industry.  At 76 years of age, the woman looks spectacular.  Her body is still to die for and that stunning face is unparalleled.  In fact, a gentleman behind me on the way out of the theatre, and close to Sophia's age, said to his wife, "The breasts are good."  Yes, sir, they are, enviably good. 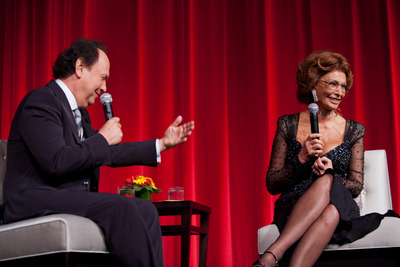 The evening was hosted by the man everyone wishes would come back to the Academy Award telecast, Billy Crystal.  Before director/choreographer, Rob Marshall, gave his tribute to Sophia, he yelled over to Billy how fantastic he was and then asked him, "Where were you this year?  You know what I mean."  Wow, that was ballsy to say in the House of Oscar.  Remember, these are the people who vote for the Academy Awards and put on the show, but honestly, Marshall was exactly right.  Crystal came out of the gate with an Osama bin Laden joke about his last words being, "I can't believe I am going to miss Wednesday night."  That is how coveted the tickets were to last night's sold out event. On my way in, a woman asked me if I had an extra ticket.  When I mentioned I was a guest of someone at the Academy, she replied, "You are going to have quite an evening." 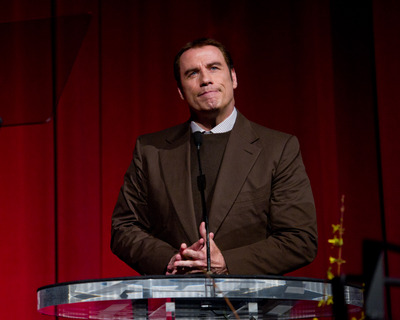 With wonderful appreciations coming from Roberto Benigni via video message and in person from John Travolta and her son, Edoardo Ponti, Loren was visibly moved and downright soft-spoken during her acknowledgements.  The fun really began when she sat down to chat with Crystal because the banter back and forth was quick and hilarious.  Loren had personally chosen "Beee-lly" to be the host of the evening, and boy, did she pick well.  There is great affection between the two and only Crystal would lead off a series of questions with, "Where do you get a slice in LA?"  Classic.  Yep, the pizza in LA sure does not compare to that of Italy. 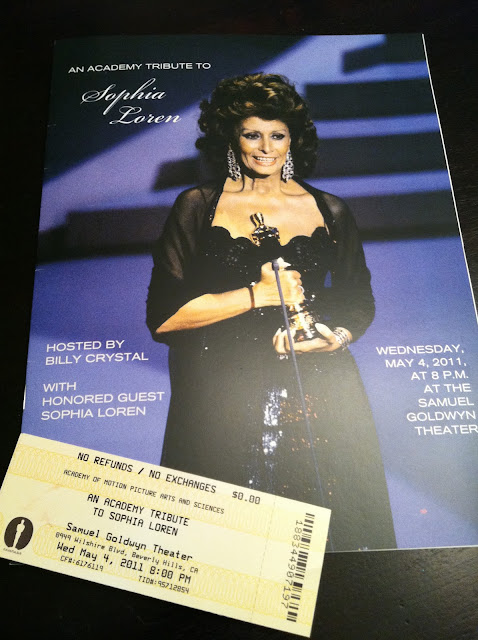 The evening was punctuated with incredible film clips from her career from her Oscar-winning performance in Two Women to her famous striptease scene in Yesterday, Today, and Tomorrow to her lovely role in 2009's Nine.  I will list the movies selected for the tribute below because I think her films are a must for your summer Netflix queue.  Also, be sure to watch one of my favorite Oscar moments from 1999 when Loren presented Roberto Benigni with his Academy Award.  Her yell and wave with the announcement makes me smile every time. 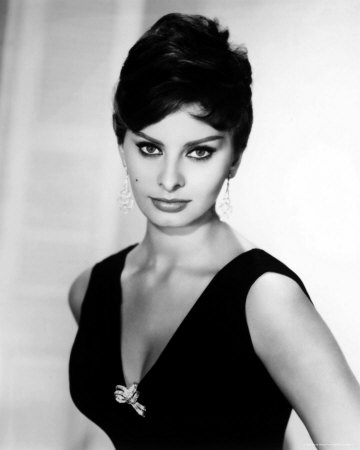 Many thanks to Tarrah Curtis for the ticket to last night's event.  It was such an incredible program, so I appreciate you letting me share in the experience. 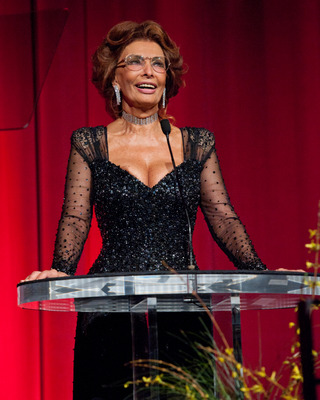