Choose Your Own Adventure

It's another edition of Choose Your Own Adventure.  I've been running all over Hollywood covering events, so pick the one that interests you the most.  I can't even keep up with everything I am doing, but it is all compiled in one central location. 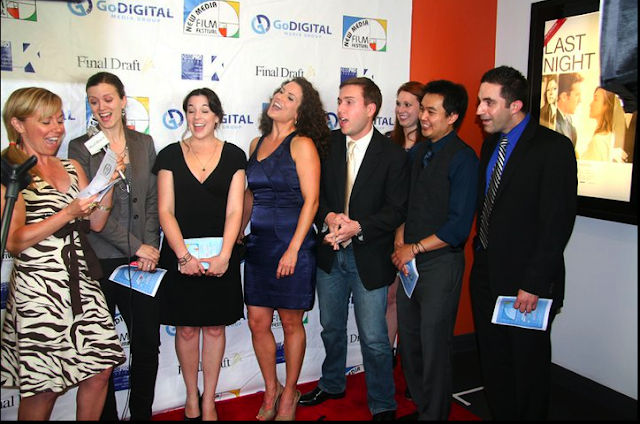 1.  New Media Film Festival:  Eddie Carrington wrote a great article in the Examiner about the New Media Film Festival and he kindly gave me a shout out.  Thanks, Eddie!  Also, the LA Film School published their photos from the festival and they included a couple of them from the live stream.  You can see the photos on their Facebook page and a shout out to Ben for taking and posting the photos. Thanks, my friend!

2.  Gracie Awards:  You can see all of my photos here and check out the interviews above with Meredith Vieira, Peggy Fleming, Dr. Laura Berman, Linda Ellerbee, Mayim Bialik, and more.

3.  Diva Talk Radio:  A big thanks to Gina Parris and Kelli Claypool for having me on their show yesterday.  It was a 30-minute discussion on my journey and the myths of Hollywood.  Don't believe the hype, ladies!  If you missed the show, you can listen to the episode here.

4.  Godspell:  If you missed the news, "I'm a Broadway Producer!".  Find out how that happened here.  The opening night was officially announced yesterday, so I have marked November 7, 2011 on my calendar.  Yep, I'll be there opening night at the Circle in the Square Theatre as two of my longtime friends team up to bring the revival back to Broadway.  2011 is turning out to be the year of dreams for me.

Photo Courtesy of LA Film School.
Posted by Kristyn Burtt at 12:00 AM