Web Television on the Move! 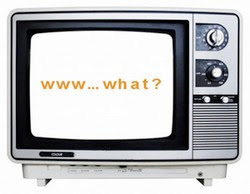 This has been an amazing few weeks for Web Television with festival news, upcoming events, and strong press.  The tide is finally turning and I think the next year is going to prove to be the breakthrough period in recognizing Web Television as a contender.  Here's a round-up of the latest events:

1.  ITVFest:  I was happy to see that some of my predictions for shows like Time Traveling Finger and 15 Minutes were correct.  Stephen Leonard won the Best Animation Award for Time Traveling Finger and Bobby Salomon won Best Director for 15 Minutes.  After watching 15 Minutes, I said that the series was ready for TV.  I hope the cast and crew see some lift from distributors because the show was well-polished and highly-produced, and the look of the show, shot on the Red camera, set it apart from the others.  A real quirky series, Octane Pistols of Fury, was a big hit this year, going home with the Best Web and Best Comedy Awards for ITVFest.  I wasn't sure what to make of the series, but it was funny with a strong point of view.  I am interested to see where they go next with the show because I am not sure what direction that would be. Perhaps, the joke is on me and that is exactly what the creators want me to think.  Finally, topping off his wins at NY Television Festival last fall and his Streamy win in April, Jeremy Redleaf of Odd Jobs won for Best Writing.  He's an absolute delight who keeps raking in the awards, so check out our Web Files interview with him from last fall.

2. NY Television Festival:  The official entries were announced on Monday and you will see some crossover from ITVFest like Illuminati Brothers, SOLO the Series, and Octane Pistols of Fury.  Some new series from prolific creators Brett Register, Scott Brown, Stephen Leonard, and Al Thompson will also be making an appearance, so it looks like a strong line-up.  The festival runs September 20-25, so keep your eye on the web that week.  Congratulations to all of the official entries!

3.  SXSW Interactive:  I was thrilled that my SXSW Panel Proposal was approved and it is up for vote for the Interactive Sessions.  My panel is titled:  Hosted Web Series:  New Opportunities for Creativity.  The voting is open until Friday, August 27th.  Also, Marc Hustvedt from Tubfilter has a panel up for vote on Interactive Video Storytellers so, get out there and vote!
4.  Fast Company:  I don't if anything was more thrilling than the Fast Company spotlight on "Must -See TV:  The Web's New Fall Lineup".  Highlights include a feature on Felicia Day, Babelgum, Funny or Die, Atom.com, and Next New Networks with their current and future Web TV offerings.  I was even more excited when I realized I had interviewed a lot of creators involved in the Fast Company spread:  Legend of Neil, Kevin Pollak, The Bannen Way, Felicia Day, Al Thompson, Jeremy Redleaf, and Illeana Douglas.  Maybe I am onto something here with The Web Files.........

5.  Digital Chick TV: There is a new site highlighting the contributions of women to Web TV:  Digital Chick TV.  I am excited to see all of the female producers, creators, and actors getting their due.  Women play a significant role in this space, so I am glad their work is being recognized.  Oh, and I am described as "ever-perky"on the site.  I love that description.  I am out to kill all of you with my perk on The Web Files!

6.  Squatters:  There is nothing better than to see a producer recognize the talents of their crew.  Brendan Bradley of Squatters contacted The Web Files looking for additional footage from their red carpet premiere to highlight the work of Director of Photography, James Rhodimer, and composer, Morgan J. Pearse.  The bonus videos have just been release on Dailymotion, so check it out and let's celebrate all of those that work tirelessly behind the camera:

7.  Anyone But Me:  The fundraising Web-a-Thon for the award winning series, Anyone But Me, continues and I urge you to make a contribution to help fund Season 3.  I don't think any other series has done more for the LGBT community and creators, Susan Miller and Tina Cesa Ward, are so passionate about their project, so help make Season 3 a reality for the cast and crew.  They deserve it!

Okay, I think that is a pretty strong round-up with what is happening in Web TV. The space is exciting and it's moving quickly.  Did I miss a big story?  Let me know in the comments and thanks for stopping by!
Posted by Kristyn Burtt at 8:34 AM