Welcome to Friday the 13th!  Is it supposed to be a lucky day or an unlucky one?  Since it has been a great week, I am going to vote that it is going to be a good one for us all.  Here's a wrap-up of this week's events:

Sunday:  Thanks to all of you that read and commented on my Sunday excursion to the Hollywood Bowl to see Rent.  You had a lot to say about Vanessa Hudgens as Mimi and I was thrilled to hear how many of you attended the show.  It warms my theatre geek heart.  Speaking of theatre geeks, I have always been one.  In fact, CBS News did a great piece on my theatre camp, Stagedoor Manor.  A little 15-year-old me even made the clip.  Stop at 4:28 and see if you can pick me out of the line-up:
Monday:  I spent Monday morning at the movie theatre watching Step Up 3D for Jenn Page's Movie Review Round Table.  Before you start to groan, watch the review video and remember, Jon M. Chu of The LXD directed this movie:
Tuesday:  I am in the running in Logitech's "Host with the Most".  If I win, I get to host my own show on Google TV from a beautiful loft in downtown LA.  Tough job, right?  Well, I need your votes!  You do need to have a Facebook account to vote, so if you think I would be right for the job, head here:  Logitech Host.  (And here's a secret, the site tells me who voted.  I've gotten a few chuckles that people have claimed to have voted, but they really didn't.  Facebook doesn't lie. Haha!)
Wednesday:  It's another week with Broadcom and MoreWireLess and I think we are down to the last couple of videos.  I know, I know, I keep saying that, but I think it was supposed to be ten episodes and now it is twelve.  The good news?  I finally change my shirt. Check out the wardrobe change, it's green this time.  Oh yeah, and you will learn about transferring files using Bluetooth:
I also found out that my panel proposal for SXSW Interactive had been accepted.  The title of my proposal is "Hosted Web Series:  New Opportunities for Creativity".  If you are planning on heading down to Austin and would like to attend this panel, well, yep, I need your vote again.  Sigh.  I know it is a lot to ask.  Here is the link to the panel.  I will also keep an icon up on my blog to remind you if you would like to do it another day.  Thanks!
Thursday:  I am here in Portland for The Dew Tour this weekend.  I am hoping for a Shaun White sighting since I love anything related to the Olympics.  I almost had a heart attack when a co-worker asked, "Who's Shaun White?".  Do you know who Shaun White is?  Just wondering if I am out of line for thinking most people in their 20's and 30's would know who he is.  I digress. If you are in Portland.  Make sure to make a visit to Voodoo Doughnuts for their signature Maple Bacon bar. (Um, there is even a cock and balls doughnut for you adventurous types.)  Yep.  I said bacon and it is delicious.  The wait can be long, but you won't be disappointed.  I first learned about it on The Amazing Race.  The store was a stop along the way.  Remember, "The Magic is in the Hole". 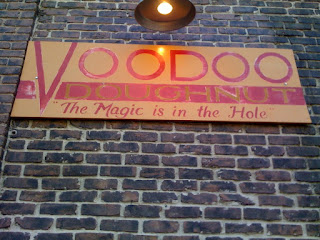 Friday:  Here is where all of the fun stuff begins.
1.  If you are interested in the digital space, check out Digital Chick TV for shows that produced by women.  They have a great list of web series and solid descriptions of each show.
2.  My lovely pal, Kristoffer Kelly, wants me on Entertainment Tonight to replace outgoing host, Mary Hart.  Why it might be a long shot, he started a Facebook page for me.  I'm flattered.
3.  GIVEAWAY!:  If you haven't entered yet, head on over to my Online Shopping post.  I am giving away an amazing pair of City Slips.  They are perfect to slip into your bag and pull out when those high heels start to pinch.  You have until August 19th to enter.  Good luck!
Have a great weekend and I'll see you back here at Red Carpet Closet on Monday!
Posted by Kristyn Burtt at 8:27 AM