Behind the Scenes of Johnny B. Homeless 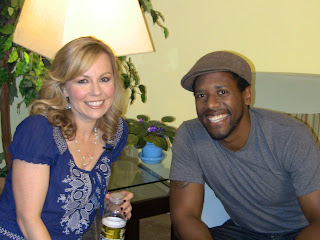 My first introduction to Al Thompson was at the 2009 ITVFest red carpet gala.  His official entry, Johnny B. Homeless, was a part of the festival and he kindly rapped his theme song on the red carpet for us.  "He's Johnny Homeless!"  In the year since, he signed a deal with Atom.com, won the People's Choice Award at NY Television Festival 2009 (NYTVF), created two new series, and he was again selected for the 2010 NYTVF all while jumping back and forth between the coasts for work.  I don't know anyone in this industry who has a bad word to say about Al.  He's funny, charming, handsome, and one of the most hard-working actor/creators in the industry.  We tried for months to get our schedules together and sit down with Al, but he was hard to catch.  The stars finally aligned and I was glad we were able to tell his story.  Mark my words, he will be a major player in the entertainment industry within the next five years.

One thing about Al that I really appreciate is that his work shows the depth of his range.  Watch the comedy behind Johnny B. Homeless and then turn around and see the sexiness of Lenox Avenue.  That's where his talent really shines.  Another favorite moment of the interview involved Al's love for TV theme songs.  He created a really catchy theme for Johnny B. Homeless that has you walking away singing.  I miss the days of singing to the Facts of Life or The Jeffersons theme song.  In fact, the TV theme song has virtually been eliminated from 95% of the shows out there to give more time for sponsors.  Do you really stick around for the ads?  I didn't think so.

Al talked about the importance of festivals, particularly ITVFest, in his career. Even with his success, he continues to strive for more and he's still hitting that festival circuit.  You will see his next entry in September's NYTVF with Baby Daddy Memoirs and I know he's looking forward to retaining his title.  Watch out, NY, here comes Al Thompson!

Finally, I have met Al's lovely fianceé, so he won't be marrying Sandra Bullock anytime soon.  However, how hilarious was their Photoshopped couple shot?  Hey, a guy deserves a dream! As always, stick around to the very end to see a fun little outtake from the shoot. Here's the episode of The Web Files with Al Thompson: