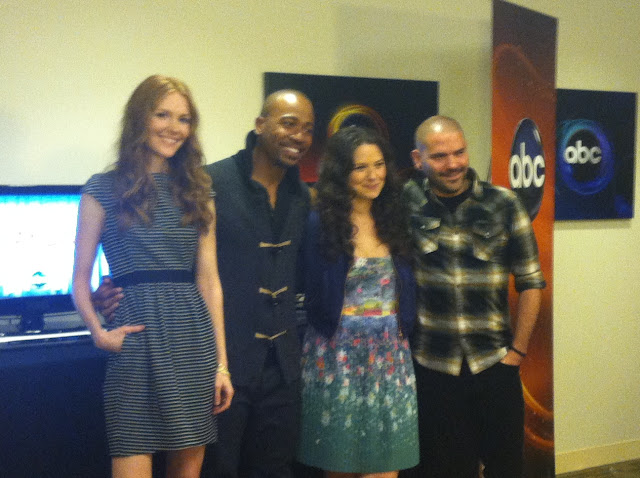 When Shonda Rhimes calls and offers you a role in her latest series, Scandal, you immediately accept, but not without some trepidation.  For cast members like Columbus Short, that dialogue she has written for you can be a bit "daunting" because of the rapid pace it's meant to be spoken.  It's very similar to the other masters of dialogue like Aaron Sorkin (The West Wing) or Amy Sherman Palladino (Gilmore Girls).  If you can master this patter, you realize that "the story is more important than you" as an actor, says Katie Lowes.  There is no ad-libbing on set per an email via Rhimes before production began on the series, but the show creator is adamant that she doesn't care how you say the words, just say what is written.  It's this execution of the words and the story that has the cast singing the praises of Rhimes who is well known for her successful series, Grey's Anatomy and Private Practice. 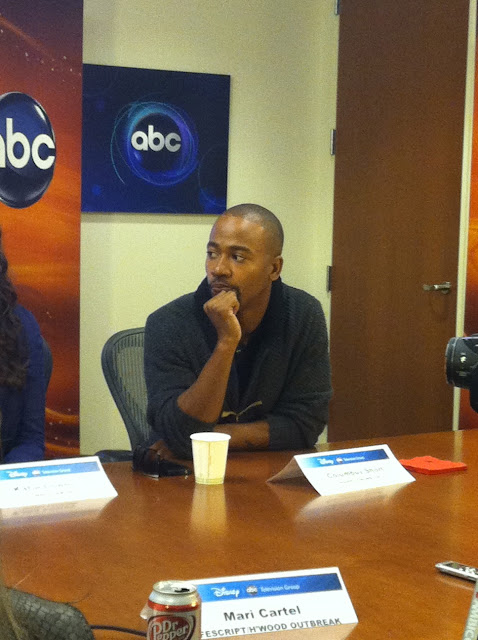 I had the opportunity to meet some of the cast at Disney Studios for Red Carpet Report earlier last week and it was interesting to hear how they had to make adjustments as actors to accommodate the series.  Guest stars who came on set to work for an episode often had a hard time with the rhythm of the dialogue and even the cast members often found themselves having to slow down when they worked on other sets outside of Scandal.  The most revealing thing for Darby Stanchfield was that fact that "each character who you think they are in the pilot, they are not the same character by the end (of the season)".  She says, it truly was a "supreme experience in TV" and that she really connected to the role.  She even got emotional and shared that it is the "biggest gift to feel fulfilled [as an actor]."

While the show takes place in the trenches of Washington, DC, the cast found themselves shooting in Pasadena in 90-degree weather.  The looks were created by The West Wing costume designer, Lyn Paolo,   which helps give the feel to a series that "pushes the envelope like a cable network", reveals Short. "It's unlike anything you have seen on network television."  Rhimes created characters that are complex, flawed heroes who are lead by a black woman, Kerry Washington. The series is shot with a dark,cinematic feel to it and it involves storylines that viewers don't often see on television. Stanchfield advised us Thursdays will be a great time to "Get your moody on".

To "get your moody on", watch Scandal on ABC at 10PM beginning April 5th.

In a fun aside, fellow Scandal cast member, Josh Malina, tweeted me in response to my call for questions for the cast.  Josh was relieved to know that his cast thought he was "super sexy".  I guess that makes working together on Season 2 much, much easier. 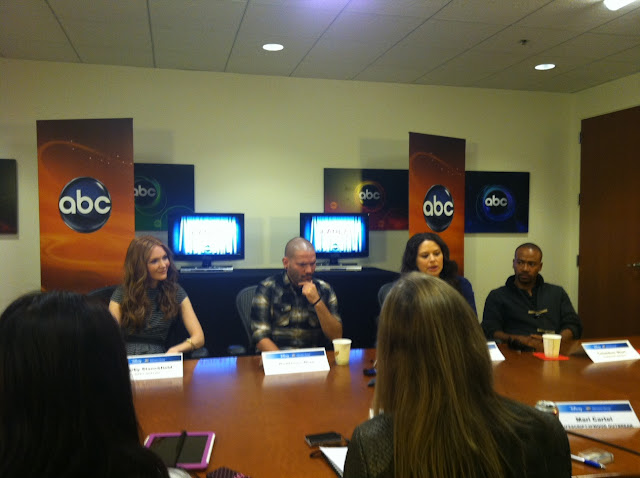 Posted by Kristyn Burtt at 8:35 PM