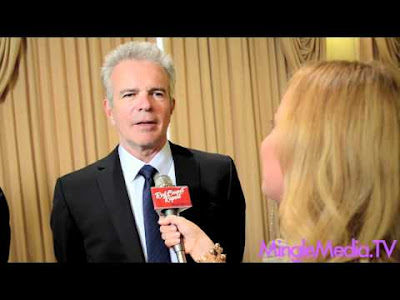 Interviewing Tony Denison of The Closer.

If you thought awards season was over, don't worry, there is always an awards show happening in Hollywood.  Last Thursday, I had the opportunity to cover the 16th Annual Prism Awards which honor the accurate depiction of social issues in TV and Film.  Honorees included shows like Parenthood and Southland as well as actors and TV personalities from William H. Macy, Craig T. Nelson, and Dr. Drew for focusing in on issues like substance abuse, mental illness, and PTSD (Post-Traumatic Stress Disorder) in military veterans.  The yellow carpet was filled with celebs and I got the inside scoop from some of your favorite television actors.

From Gugu Mbatha-Raw of Touch:  I learned that her co-star, Kiefer Sutherland, is an avid chess player.  Hmmm, I was looking for a more exciting story, but who knew Kiefer was so focused on set? See our interview here. 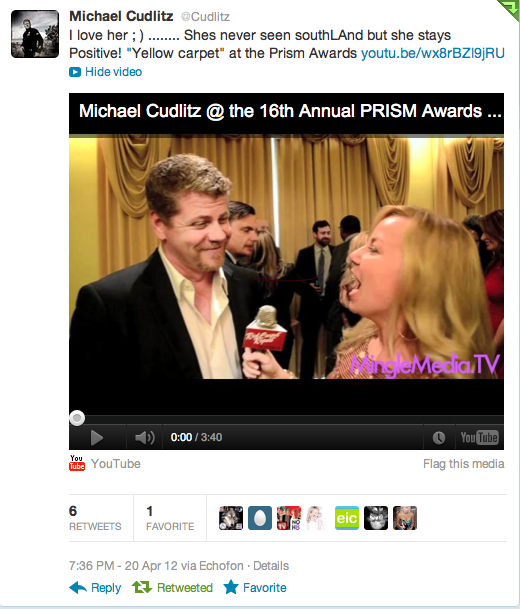 From Michael Cudlitz of Southland:  I promised that I would watch his show over three years ago via Twitter and it hasn't happened yet.  I made a new promise to him that he now has his Twitter followers bugging me to honor and we caught it all on camera--including a little bit of heckling from Mr. Cudlitz himself.

From Leigh Anne Tuohy whom Sandra Bullock portrayed in her Oscar-winning role in The Blind Side:  I asked her about the scene in the film where her friends question taking in a young black man into their household and had her friends' attitudes changed after all of the success.  I was surprised to hear her response and I think you will too.  See her interview here.

My Twitter feed has been a lot of fun lately with tweets from Leigh Anne Tuohy, Michael Cudlitz, and Deborah Norville.  Make sure to follow me for even more entertainment scoop!

From Craig T. Nelson of Parenthood:  He has hit the actor jackpot with a long career in TV and Film.  It is rare for an actor to have lightning strike even once with a successful television series, but he has succeeded over and over again with Coach, The District, and now Parenthood.  When I said he didn't need the affirmation because he is on the right track in his career, he said, "You always do. You always want to know that your work is not only appreciated but is touching somebody."  Ah, spoken like a true professional.  Now that's how you have longevity in your career.  Take note, actors.  See my interview with Craig T. Nelson here.

For more videos from the event, head on over to Red Carpet Report.