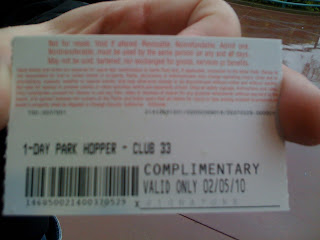 UPDATE:  Check out the latest information on the waiting list and new perks for Club 33 here.

Anyone that knows me understands that I am a HUGE Disney dork. The parks have always been a fun place for me to visit whether I was 3 or 33 years old. My family spent a considerable amount of time visiting Walt Disney World in Florida during cold winter breaks when I was a kid and once I moved to LA in 2000, Disneyland became a fun day trip several times a year. I became clued in on a private club that Walt Disney had built to entertain VIPs at the park back in 2001. Walt never had the opportunity to see this club finished, but I made it my mission to find a way into the famed Club 33. 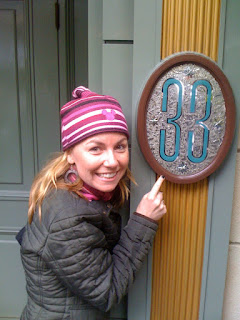 I spent countless visits taking my picture next to the sign, hoping that maybe one day I would make my photo a reality. Well, 2010 was the year it all came true. My super cute boyfriend was able to make a connection with someone that had a corporate membership, and that is how my December 2009 birthday gift came to be. It really was one of those friend of a friend of a friend of a friend situations, so whomever you are, thanks for making one of my top wishes come true. Scratched off the bucket list! 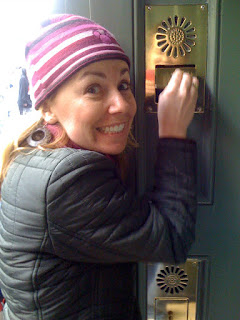 You receive free admission to both parks the day of your reservation and we checked in at Guest Relations over by California Adventure. Our day happened to be the wettest day I have ever been to at the park, but no lines makes for easy ride hopping. The reservation was for 1 PM, so we were told to check in 15 minutes early. We headed over to New Orleans Square and checked in by pressing the hidden bell. They asked for the name of the reservation and then buzzed us in. Turns out, our table wasn't ready, so we had to go out and do the whole process again ten minutes later. Hey, it's Hollywood, you always get a second take. To see my grand entrance, here is a short one minute clip: Club 33 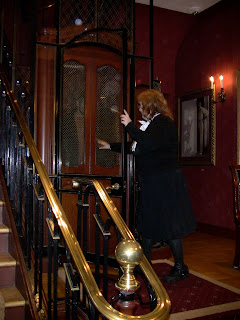 Once we were let into the lobby, the concierge gave us a brief history of Club 33. It is decorated much like a Parisian hotel lobby right down to the lift that was replicated by Disney Imagineers. Americans are kind of chubby, so the lift only holds about 3 average sized people...maybe in France it would be 4 or 5 people. There is a set of stairs to the left of the lift, so half of us hiked it up while I rode the elevator to the top floor. 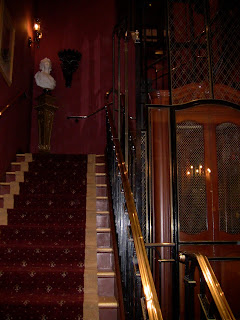 Much of the decor was selected by Lillian Disney with lots of antiques like this harpsichord rumored to have been played by Elton John during a visit. 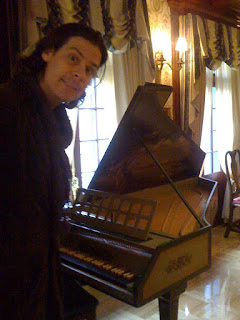 The infamous bar! Yes, this is the only place in the Disneyland park where you can drink. (California Adventure allows alcohol to be served in several restaurants.) The bartender was quite a character, but we enjoyed him because he said, "heavy price, heavy pour.". Yep, the drinks were strong and delicious. 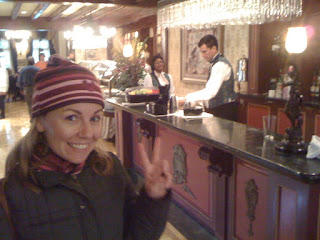 Along the walls, there were beautiful wardrobe sketches from the movie, Mary Poppins, along with renderings of Disneyland back in the 1950's, and a fantastic photograph of Walt with Shirley Temple at the Academy Awards. 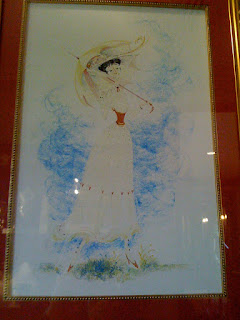 During media interviews when I worked at the Kodak Theatre, I was always asked about the restrooms. I don't know why people are obsessed with how fancy a bathroom is, but if you are one of those people, these next two photos are for you. This is what the Club 33 bathroom looked like.....vanity area.... 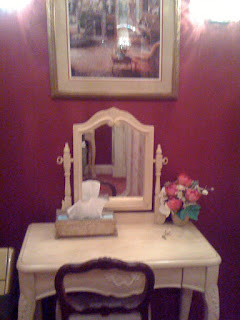 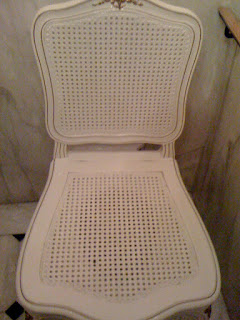 For me, I always want to know about the food. So, all of you foodies out there, enjoy! 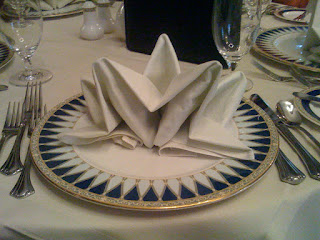 The menu....I chose the Monkfish, but our waitress kept trying to get us to order the Chateaubriand. She never stated that it was the best on the menu, she made it sound more like a fire sale on beef. 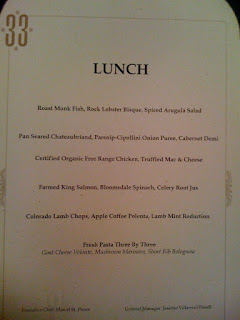 The opening course is a buffet of cheeses, lobster tail, shrimp, salads, and soup. I was hungry..... 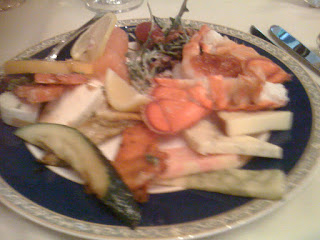 And then my meal came, so I had to find some room for my Monkfish with Lobster Bisque. 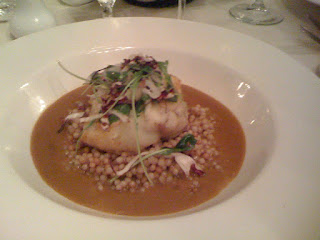 But wait, there's more! Dessert buffet filled with every sweet you can imagine. The purple cake thing was not so good, but my Hostess cupcake lookalike was amazing. 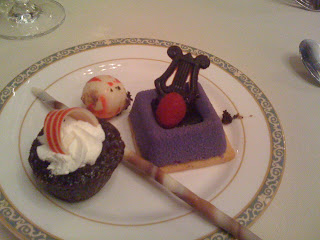 But there's even more! It's my birthday celebration, so I also received a Mickey Mouse chocolate mousse cake. Yum! 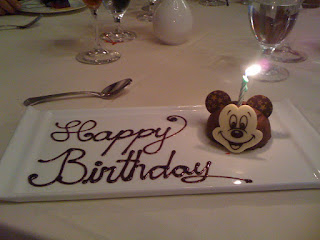 After eating we headed outside to the balcony to check out the view.... 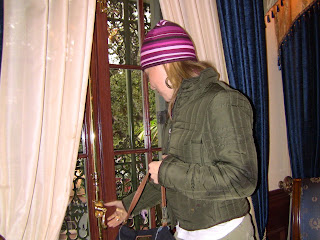 The wet view below with umbrellas and ponchos in sight. This is looking towards the Fanstasmic stage. If you eat dinner at Club 33, you might be able to catch the early showing of Fantasmic from this location. The back end of the balconies leads you into New Orleans Square by the restaurant, Bayou. 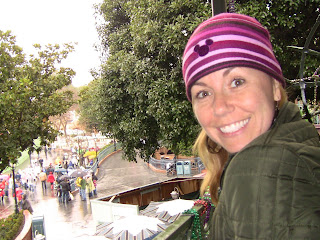 The infamous vulture that Walt didn't live to see, but it was designed as one of the Disney animatronics to talk to the dinners and listen in on their conversations. 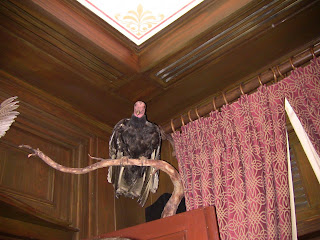 In fact, he had microphones built into the chandeliers so the person behind the vulture could spy on people dining at Club 33. (microphone in the center of chandelier hanging down.) 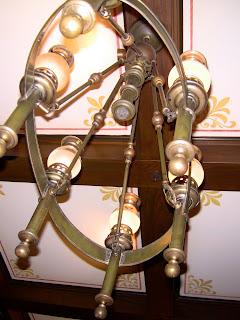 And all good Disney attractions lead to a gift shop. We bought an $18 (suckers!) shot glass with the Club 33 insignia. We also managed to take home a few napkins lifted from the restroom, our cocktail stirrers, a pen, and a few chocolates. Hey, it's a once in a lifetime visit! We spent over 3 hours here and it was well worth it....especially the ride on Space Mountain after a few cocktails! 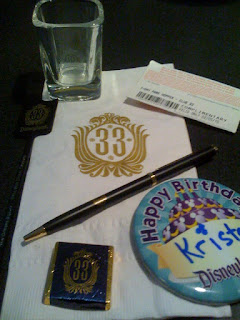 Are there any Annual Passholders reading this? I would like to get my hands on these vintage pins. Email me if you have the hookup. (My first and last name at Gmail) 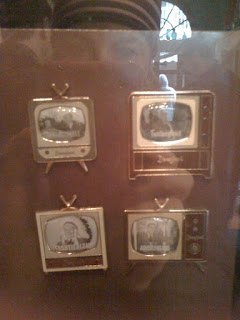 Now, a few parting shots of our day around the parks....Tower of Terror! 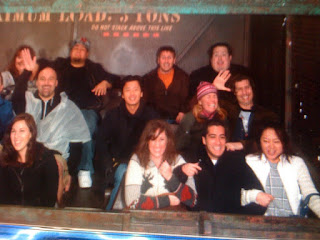 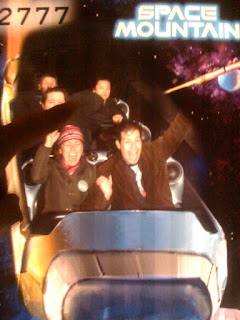 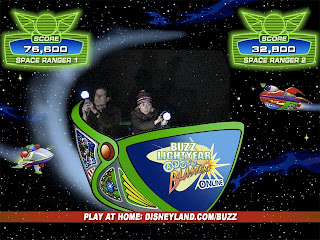 Thanks for celebrating with me at Club 33! 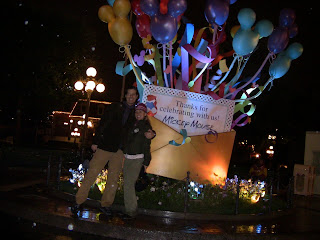 P.S. For those of you that are Hidden Mickey fans, they do exist at Club 33. It isn't in the architecture, but in the cast members' Club 33 uniforms. Happy searching!

Many thanks to Disney Food Blog for linking to this post. If you are a Disney Dork and a foodie, this is the site to check out: Disney Food Blog
Posted by Kristyn Burtt at 6:09 PM