IAWTV Screening for Blue Movies and Fall of Kaden 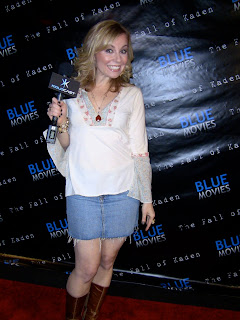 Tuesday night, I had the opportunity to cover the screening of Fall of Kaden and Blue Movies for
Koldcast TV and The Web Files at Cinespace in Hollywood. Web series creators, Matt Doubler and Adam Leiphart for the Fall of Kaden, and Scott Brown for Blue Movies, made a wise and strategic choice to hold a "For Your Consideration" screening for the International Academy of Web Television (IAWTV). It was a terrific opportunity to get some of the members to watch their series on the big screen and, hopefully, garner a nomination or two.
Me giving the thumbs up to my cameraman before interviewing Blue Movies creator, Scott Brown. 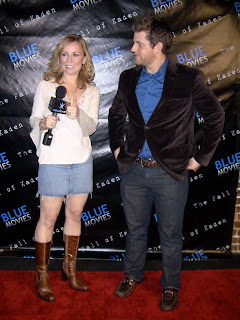 In a field that has grown tremendously in the past 12 months, this was an excellent way to stand out in the crowd. Why not take a page from the Miramax Academy Award handbook? It worked for Shakespeare in Love at the Oscars in 1999 and I think it could work in the web series world as well. Rumors of screeners and postcards being sent to the IAWTV members abounds lately. What have you done to make your web series stand out during this crucial nomination time?
Doing my opener for The Web Files segment on the red carpet...... 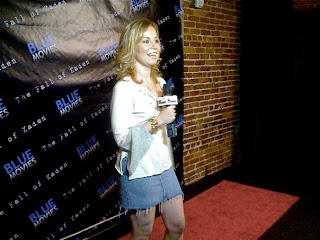 Inside the screening room, IAWTV members and the rest of the audience were treated to a hilarious PSA/Streamy Consideration video hosted by the busiest host in the biz, Shira Lazar: For Your Consideration. Creativity is key and we saw that in abundance on Tuesday night. Two radically different web series coming together to produce an unforgettable night. Wisely, these shows do not fall in the same categories: Blue Movies is clearly a comedic look at the porn industry and Fall of Kaden has the grittiness and edginess to fall into the dramatic category.
Interviewing the cast and creator of Blue Movies........ 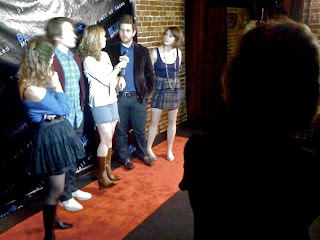 This year is a game-changer in web series, with the high production values of new shows like The Bannen Way to a greater emphasis on the 2nd Annual Streamy Awards, the web space continues to makes its climb to the top. We have a long way to go, but I think there is light ahead.
Mark Gantt of The Bannen Way and I talking about the upcoming award season...... 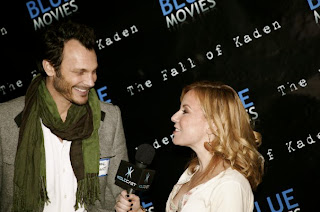 Thank you to Marti Resteghini and David Samuels of Koldcast TV for giving me the opportunity to host their red carpet coverage for Fall of Kaden and Blue Movies. I will post the video here soon. Stay tuned!
Thanks to Matt Doubler and Adam Leiphart for photos 3, 4, and 5. If anyone has additional photos from the evening, I would be happy to post them here.
Posted by Kristyn Burtt at 10:56 AM