Behind the Scenes of Elevator 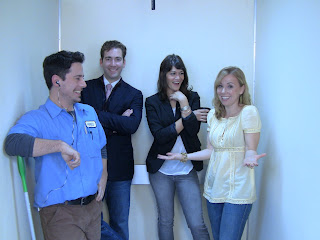 Okay, there are a lot of you out there who are jealous that I got to stand in the Elevator.  Who knew the set was the source of much envy?  I do appreciate the comments and the emails though.  If you are really interested in how the Elevator is created, make sure to watch until after the credits run.  You will see us break down the mystery of the Elevator.  In fact, we are starting leave some of the really fun footage to the wee end, so make it a habit to watch every last second.  Anyway, Woody Tondorf, Genevieve Jones, and Ben Pace entertained me throughout this entire episode.  I am not sure I got a word in edgewise, so Sandra and Perry Payne worked miracles to make the interview as coherent as possible.  You can tell they all have great chemistry and truly enjoy each other's company.  That is why Elevator works. 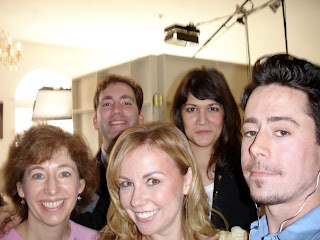 I personally had a blast since Genevieve and Woody are both Bostonians.  I always think that there aren't many New Englanders living on the West Coast, but I continually run into my NE peeps in the web series world.  We left Ben Pace out of a couple of conversations reminiscing about all that is Boston, but we still love him regardless of his geographic upbringing.  Woody also attended one of the rival prep schools in the area, but I will forgive him because our hockey team was better.  So, I had lots of hometown connections on this shoot. 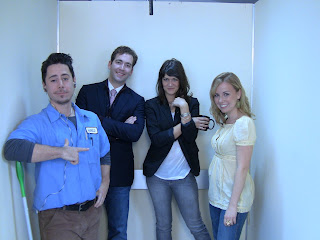 What you didn't see in this episode was the mini-Elevator show we did on the fly. The problem was, I was in it.  While I am fine at hosting, any sort of acting or improvisation results in failure of epic proportions.  We tried several takes, but I don't think it ever reached the level of funny that is required in Elevator.  So, I am very happy that footage made it to the cutting room floor. 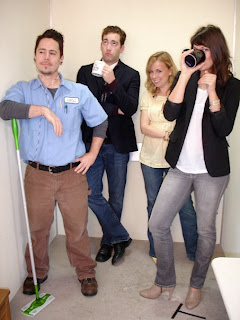 Given the success of the show, I think we also dropped the bomb on a lot of people that this will be Elevator's last season.  We were aware of some of the changes going on behind the scenes, but we didn't address it too much during the interview.  Sandra and I talked about doing a post script to the episode, but I think the article, written by NewTeeVee's Liz Shannon Miller, stands as the best epilogue to our feature.  Have no fear though, after 86,000 subscribers, 200+ episodes, and 48 million views, I think we will see more of Woody and crew in the future.  In fact, I expect a Web Files invite to the 24 hour marathon shoot of the final season of Elevator.  While I won't be writing or acting in the show, I sure can do press coverage.
Finally, if you haven't seen our episode of Elevator, click here: Elevator
Coming up on Wednesday, our second episode of The Web Files Buzz featuring an on-set visit with Olga Kay's Circus and the red carpet coverage of The Resolve premiere.
Photos 2 and 4 courtesy of Ben Pace.
Posted by Kristyn Burtt at 4:29 PM