Behind the Scenes of Legend of Neil 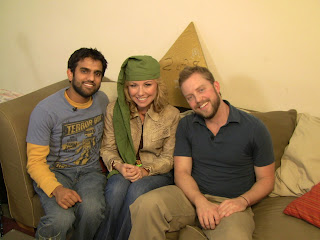 Okay, all of you Legend of Neil fans have me baffled. Never in the 29 episode history of The Web Files have I received such interesting and rather, uh...odd feedback. Many of you are obsessed with the decor of Sandeep Parikh's apartment. From the oranges on the table to the decorations on the wall to the lack of decorations on the wall, you all had something to say. I think a lot of you want to help Sandeep out or maybe there are some ladies out there looking to add a woman's touch to the place. Regardless, Sandra did add the oranges to the table, a bit of color for the interview. I have no idea if Sandeep is looking for decorating tips, but hopefully, he will check out my blog and add his 2 cents.


**UPDATE** I have a clarification and a turn of events.......Sandra DID NOT add the bowl of oranges, Sandeep DID! So, he is the one who added a bit of color to his coffee table and I think that is a lovely decorating idea. So, maybe the naysayers should be taking tips from Sandeep? I am calling this on DecoratorGate 2010!

On to more important things, the interview! I think Sandeep was very clear that while his show is higher profile than some of the other web series out there, it is not a huge money maker. He sells merchandise to supplement the production costs for the show. While we didn't see all of that during the episode, you will notice a pile of shirts to my right during the show and the t-shirt I wear during the opening. Another question that wound up on the editing room floor that I think is really important to ponder: "Would their show been as successful today on YouTube as it was back in 2007 when they first launched?" Tony Janning responded with an honest, "I don't know." It is a huge challenge to launch a web series on YouTube because the site is so saturated with content. It is tough to stand out amongst the crowd. Now, Legend of Neil was going to be successful, regardless of YouTube, but it may have taken more time to find an audience had they launched it in 2010. 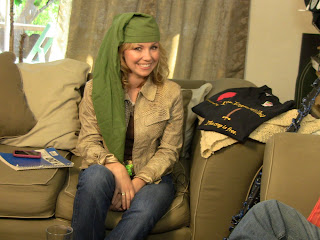 I had to watch this episode several times to refresh my memory about the behind the scenes action. I looked back at the calendar and realized that we shot the show on December 14th, 2009, so it was almost two months ago. It isn't often that we bank shows that far in advance, but we sometimes we have to work with shows that have deadlines like series premieres or finales. That is why you saw episodes with The Bannen Way and A Comicbook Orange before you ever saw Legend of Neil. Both episodes were shot in January well after Legend of Neil shoot, but they aired before the Sandeep/Tony episode in order to accommodate their season premieres. 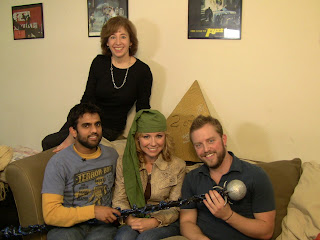 And yes, I did get a chance to wear Link's hat and check out all of The Legend of Neil props. I know there are a few jealous fans out there. So, that was a really fun treat for me. If you haven't seen the episode, check it out here: Legend of Neil.

Wednesday brings our first episode of The Web Files Buzz featuring "the buzz about the biz....the web series biz". Highlights include the red carpet of the IAWTV screening of Fall of Kaden and Blue Movies, checking out Brittney Powell's Safety Geek:SVI calendar, and a set visit to the upcoming web series, SOLO the Series by Jonathan Nail.
Finally, a shout out to Casey McKinnon for kicking all of the boys' butts in January. We had a male heavy slate with Dorm Life, The Fine Brothers, and The Bannen Way in the month of January. Little Casey's episode of A Comicbook Orange not only exceeded our expectations, but the views on that episode are HUGE. I like seeing a female whooping some ass in the industry. Congratulations, Casey and Rudy!
Posted by Kristyn Burtt at 6:03 PM