Behind the Scenes of A Comicbook Orange 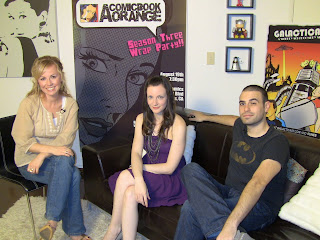 Cupcakes, yes, more cupcakes. I think it is starting to become a theme here at The Web Files. I'm going to blame this one on Casey McKinnon though. She agreed to an interview in exchange for a double chocolate cupcake. How could I say "no" to that? You ask for cupcakes, you will get cupcakes. So, now we have a Web Files cupcake trilogy with Tay Zonday, MERRIme.com, and A Comicbook Orange.
This was our very first shoot in 2010 and we headed on over to their apartment which doubles as a studio for A Comicbook Orange. Rudy and Casey's story is a fascinating one since they did not follow a traditional route into new media and film. Casey worked for a "dicklomat" (you must watch the episode until the end to understand this.) when they came up with some grand ideas for starting their own online network. Yes, I said NETWORK. I find that so darn ambitious and impressive, don't you? In the interview, you will see how that worked out for them, but it inspired the beginnings of Galacticast and A Comicbook Orange. It is also interesting to note that Casey was not the original host. Find out in the interview who was the face of the show first. 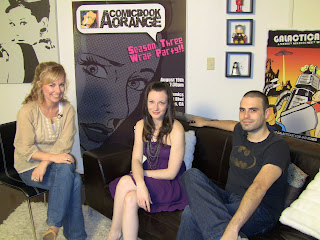 I think the other important thing to note about A Comicbook Orange is how much it has grown. If you look back at the first episode compared to the season premiere of Season 5, you will see the production values go up, the tighter editing and writing, and the strong show flow. A Comicbook Orange has found a good rhythm. In order to be a long running show, you have to change, adapt, and develop with the space and the viewers. I think Casey and Rudy are amazing examples of that. 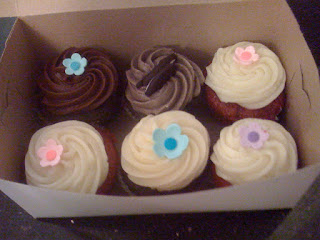 On the cutting room floor for this episode was a greater discussion on what it is like to have representation in this field. George Ruiz of ICM represents the duo and the show, but I think it is important for web content creators to understand how the relationship works in new media. For an actor, it is a more simple process: an agent represents you, you go on an audition that they secure for you, you either book it or don't book it, and then you might get some feedback from the casting director. In new media, it is about finding the right sponsors, distributors, partners, for each person and show. I think it is a more delicate balance and ongoing developing partnership in new media.
Finally, the cupcakes! Valley-dwellers, this is a new place to check out at the mall in Sherman Oaks. Fashion Square Mall has opened a cupcake extravaganza with Swirls Cupcakes. It is not to be missed. A plethora of choices, rich, moist cake, and the right amount of sweet frosting. As a cupcake connoisseur, they're delicious.
Coming later today on The Web Files, The Legend of Neil. If you missed our A Comicbook Orange episode (one of our hottest episodes to date), check it out here: A Comicbook Orange.
Posted by Kristyn Burtt at 6:18 AM