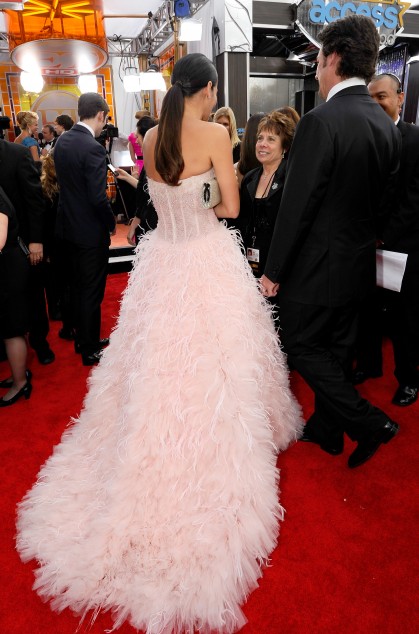 View from the back of Angie Harmon's Monique Lhuillier dress. Photo from Go Fug Yourself.

I don't think I ever gave much thought to Angie Harmon, but apparently, many others do.  In fact, she has her own fan club on Twitter called the Twangels.  I am not making this stuff up, kids.  They came out in full force emailing me, commenting on the blog, and Tweeting me about how I was wrong about the dress.  I figured the two final judges on fashion, Go Fug Yourself and Joan Rivers from E!'s Fashion Police, would be the final word as to whether I was completely wrong or whether my comments had a bit of validity to them.  Joan called the dress a "gay Swiffer" and the Fug Girls?  Well, they said it was "Fug, not Fab".  The bottom line, it's just an opinion and I really think Angie felt beautiful because she was beaming in all of her red carpet photos.  At the end of the day, that's all that really matters, isn't it?

Now that we have reached the end of the month.  Here are the absurd searches that drew many readers to Red Carpet Closet.  I love these because some are so wacky and I always wonder how Google's algorithm determines that they should stop here.

1.  "Sandra Bullock Botox Golden Globes":  Okay, I didn't write about Sandra's Botox at the Golden Globes, yet HUNDREDS of you were sent here to read about it.  I did write about Jennifer Lopez's Botox which left her frozen in time and unable to move.  Does Sandy do Botox?  Yep.  Does it look unnatural?  Nope.  Remember the next time you are at the dermatologist, "a little dab will do ya".  Don't over-Botox, ladies, it gives you butter face.  You can find the Golden Globes article here.

2.  "Are Charlie Bodin and Paula Rhodes a couple?":  I can answer this one.  Yes.  And they are engaged.  It's like my blog became Tiger Beat magazine.  I love it.   See their work in A Good Knight's Quest.  Check out my interview with them here.

3.  "Dad is Carpet Cleaning":  Hmmm, you stumped me on this one.  I don't ever offer cleaning tips because it is one of my least favorite things to do.   So, I hope you enjoyed my blog while you helped your dad clean the carpet.  To balance out my least favorite thing, this is my favorite event that I covered from the month of January:  The Academy Award Nominations.

4.  "Detroit Auto Show Carpet":  So many of you want the remnants of the auto show carpets from Detroit.  Believe it or not, the display companies DO sell off the carpet because they only use it for the run of the two week show.  I am not going to give out the names of the display companies since they will be bombarded with calls.  However, a word to the wise, this is the dirtiest carpet you could ever buy.  Over 700,000 attendees walked on your carpet and dragged in germs, salt, snow, and dirt from outside.  Is that the kind of carpet you want in your home?  See highlights from my time in Detroit at NAIAS 2011.

5.  "Olga Kay Sneakers":  I guess this has become the monthly "Ask an Olga Kay Question Center".  One month, her fans were worried about her.  I checked in on Olga and she is doing great!  The next month, they wanted to know how tall she was.  I asked her, she's 5'1".  Now you want to know what type of sneakers she wears.  Sigh, I'll go ask.  Check back later for the response.  In the meantime, check out my interview with her.

Thanks for making January such a great month here at Red Carpet Closet. I know a lot of you stopped by for red carpet/awards show coverage.  I hope you come back in February because there will be an entire week of wall to wall Oscar coverage.  Yes, I will be there LIVE on February 27th.....and I am so excited!

Posted by Kristyn Burtt at 5:47 AM