Behind the Scenes of A Good Knight's Quest 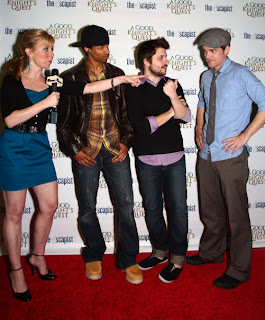 Not sure what is going on here! Me and the boys of A Good Knight's Quest....Craig Frank, Brett Register, and Charlie Bodin.
What a fun KNIGHT this was! Oh, I am punny today. Seriously, the red carpet was a blast and I enjoyed hearing about everyone's geeky hobbies. One thing I found interesting was that many of the women mentioned their computers and their use of the internet as geeky. I actually find that quite normal.....or maybe I am a huge geek and I am just in denial. The end of the episode features a terrific montage put together by Sandra and Perry Payne highlighting Brady Brim-DeForest's fencing skills (I was impaled), Michael Tohl's nunchucks, and the engineering brain power of Ariel Lazarus. Needless to say, I learned a lot about my fellow web series peers that night. 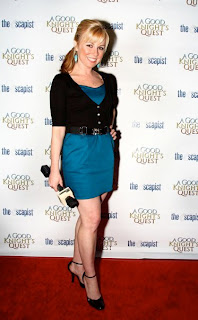 It was also a fun night because the Streamy nominations had been announced earlier in the day. Many of the nominees were in attendance, so it was nice to personally congratulate everyone. There was an electricity in the air, so I know that is going to be carried over to the 2nd Annual Streamy Awards on April 11th and also the Craft Awards on April 7th.
Me, Shira Lazar, and The Web Files makeup artist, Melissa Anchondo.........

Now, if you watched this episode, you know we renamed it The Craig Frank Show. Craig and Brett Register are turning out to be quite the prolific web series producers, actors, and creators. Craig has made an appearance in at least three Web Files episodes, so he may just take over the show by the end of 2010. It is exciting to see what Brett and Craig are up to as they have become quite the comedy team whether it is The Crew, Craig and the Werewolf, or A Good Knight's Quest. Their series, this time around, came as a result of a win at The Escapist's 2009 Film Festival which helped fund the 24 episodes of the series. So you can see while they are creating web series at an impressive rate, they are also taking advantage of the tools out there to take them to the next level.
Me, Paula Rhodes, Angie Cole, Cathy Baron, and Jessica Rose........... 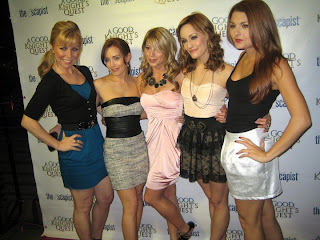 While many of you know Craig and Brett, don't forget about the 5'2" and Under Club! These ladies are "small, but mighty" and they are forces to be reckoned with. Mark my words, you will be hearing more from Producer/Actress Paula Rhodes, Cathy Baron, and Angie Cole (She arrived late, so we missed her on the red carpet. We'll get her next time.) I was lucky enough to join them for a photo on the red carpet. I miss the cutoff by an inch, so I made Jessica Rose balance out the tiny ones. It's rare that I ever feel tall, so I appreciate the petite ladies for making me look long-legged that night.
Finally, the talented Cathy Baron allowed me to borrow some of her creations from her jewelry line, CB Designs. I wore a couple of amazing rings and a bracelet designed with a Steampunk inspiration. Here's a great clip from the red carpet featuring some of Cathy's designs. Go visit her site, you are going to love it....and tell her KB sent you!
If you haven't seen our A Good Knight's Quest episode, what are you waiting for? Head on over to check it out: A Good Knight's Quest.
Photos 1, 2, and 4 courtesy of Mark Burmeister.
Posted by Kristyn Burtt at 1:58 PM