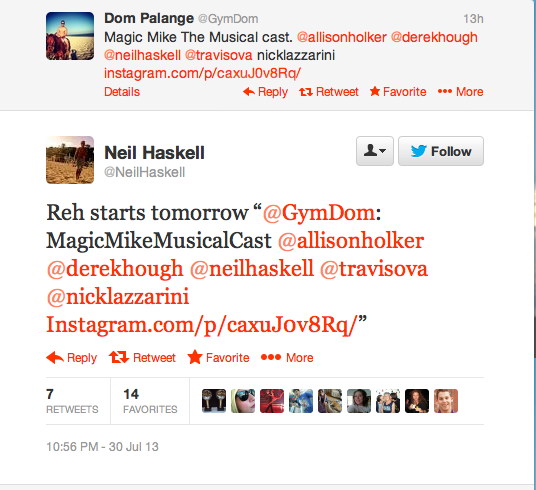 Have you seen this tweet yet? Yep, this social media message and photo (see below) are sending SYTYCD and DWTS fans into a frenzy. So, I did a little sleuthing around to see whether this was a fun joke with some good casting ideas or if this is the "good news" Derek Hough and Travis Wall were tweeting about.


Well, it's not true. You aren't looking at the new cast of Broadway's Magic Mike. I think they are smart to put the idea out there because having Derek Hough, Neil Haskell, Allison Holker, Travis Wall and Nick Lazzarini is a great way to sell tickets and put butts in those theatre seats!

Here are a few reasons why:
1. The project was just fast tracked as of Friday, July 19. It was revealed by Deadline that they have come up with collaborators Tom Kitt and Brian Yorkey to write songs and Roberto Aguirre-Sacasa to write the book. Nothing is written yet. No story, no songs.

2. Channing Tatum just confirmed the news on his site on July 22. That was the first official news that the show is definitely happening.

3. Without songs or a story...you cannot cast just yet. It too early in the process. There isn't even a director who is definitely announced before the cast or choreographers.

4. I also spoke with a Broadway insider today who told me, "Heard nothing about him [Derek Hough] here. And seems way too early for casting."

5. Even though this show is fast-tracked, it takes so much time, effort and money to get a show mounted. While casting will happen in the future...it's not happening right now.

So, I think this was a fun shot with five hot guys and one smoking girl...perfect for a Magic Mike photo.  Perhaps it puts a bug in the casting director's ears that some of these amazingly talented dancers/choreographers might be interested in doing the show. As an artist, it sure never hurts to throw your name in the ring.


Don't forget that tonight we have Spencer Liff on SYTYCD on AfterBuzz TV at 9pm PT. Watch here.