The Truth About (my) Halloween 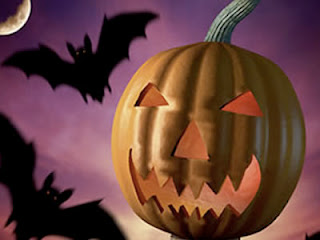 Okay, I know I am going to get a few snarky comments about what I'm about to say:  I don't like Halloween.  I don't mind handing out candy and I certainly don't mind eating the candy, but the holiday makes me want to go into hiding from October 31st until November 1st.  I hate to be such a grinch, but I don't want to dress up.  It has become such a big deal for adults, the parties have gotten bigger and bigger each year, and the costumes more elaborate and expensive.  The holiday drops at a really busy time of year for me and I just don't find it fun (for me).  For you, I know it is your favorite of the year.

Yesterday, the crew that has been with me for the last 23 days in Dallas wanted to throw a pre-Halloween bash.  I cringed at having to come up with a costume until a co-worker came up with some fantastic and cheap "play on words" costume ideas:
-Nickelback:  The band or a nickel taped to your back.
-Quarterback:  A football player or you guessed it, a quarter taped on your back.
-Babysitter:  A really hot girl to take care of your kids or a baby doll attached to your behind.
-Condiment:  A delicious topping on your cheeseburger or a condom + mints pinned to your t-shirt.
(This was one was used last night, see photo below)
-Smarty Pants:  Someone who thinks they know it all or a bunch of Smarties candies pinned to your
jeans.  (And, bingo!  I found my costume.)
For $4.17 for Smarties candies and a few safety pins at CVS, I had a costume.  It took me about 10 minutes to strategically pin my candies, put on my new cute shoes, and I was out the door!  Of course, someone guessed my costume was "Smart Ass".  Okay, that works too!  The real costumes that walked in the door were really creative from a piñata to Snooki to the Double Rainbow guy.  Everyone had a good time, no one yelled at me for not having a costume, and people asked for a sampling of Smarties all night. I just unpinned them and my costume got lighter as the evening went along.  Everyone loves Smarties candies!
Now, I am not a total Bah Humbug on this. I want to hear what you are doing for Halloween. Let me know and don't worry, if you ring my doorbell, I have a ton of candy to share.  Trick or Treat!
Posted by Kristyn Burtt at 7:04 AM