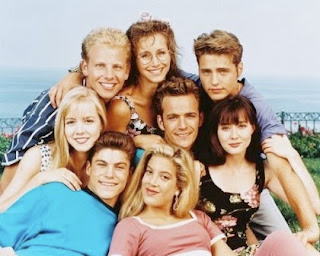 If you are under the age of thirty, this post probably doesn't apply to you.  I am sure you have watched the reruns of this amazing show, but to understand the epic of Beverly Hills, 90210, you had to be there.  The hysteria, the fashion, and the cult of the Brenda Years.  It will go down as one of the few shows I gathered around the TV for with friends, snacks, and a rush of excitement.  It was before the days of DVRs, the internet, and the spoilers that ruin each season finale these days.  The show premiered twenty years ago today:  October 4, 1990.  Eventually, the show was paired with the soapy drama, Melrose Place, and it put the FOX network was firmly on the map. (It's hard to imagine that FOX was a very young network at the time and consistently in 4th place in the ratings.)  I obsessed over everything Kelly Taylor and I was firmly in the Kelly/Dylan corner during the infamous Brenda/Kelly/Dylan love triangle.
It's a little horrifying to look back at the fashions because the early 90's were a slow recovery period from the obnoxiously fluorescent 80's.  We still wore Mom jeans, bigger hair, and loud prints, but I think the 90210 crew was the epitome of cool in the early part of the decade.  It's almost laughable to think now that Shannen Doherty was our generation's version of Lindsay Lohan.  She was tough, she liked to get married over and over, and she was often in trouble with the law.....minus the Lohan drugs and SCRAM bracelet.  Shannen's antics actually seem tame and rather quaint in comparison. Ah, how times have changed.
It has been a thrill for me since moving to LA in 2000 to see the locations where some of my favorite episodes of the series were shot and I was honored to interview Executive Producer/Show Runner, Charles Rosin, last year for his online show, Showbizzle.  The behind the scenes gossip he gave me is priceless.  I appreciate him satisfying the 90210 nerd in me.   I've seen Shannen Doherty in person and she is tiny, but her features are a lot softer looking in person. I think some of her edginess is an act.  I saw Tori Spelling at a wine and cheese party with her first husband and they made sure to take the cheese that they brought with them home in a doggy bag.  Isn't that weird?  Luke Perry is super short, short enough to ruin all of my 1990 Dylan fantasies--I like my men tall.  While I have yet to run into the rest of the Brenda years cast, I did interview Brenda's replacement, Valerie Malone AKA Tiffani Thiessen.  She's a dream to interview and simply a genuine, lovely person. I'm still waiting to interview Jennie Garth, but I will keep you posted when that happens.
Happy 20th Anniversary, 90210!  What's your favorite 90210 memory or episode?  Let me know in the comments below.