I can't believe we are doing this again, Jennifer Aniston is sure keeping me on my entertainment journalist toes this summer.  I want to thank all of the amazing Aniston fans that have emailed, tweeted, commented, and Facebooked me over the past few days.  Jen's trip to Europe with Justin Theroux has been filled with paparazzi photos with the final set of pics coming from Capri.  Jen is rocking her bikini, but some of you speculated that while she looks great, her body is a little less in shape than usual.  (I am treading  carefully on this because I hate to criticize someone's weight if they just gained a few pounds versus pregnancy pounds. Hey, my body has never looked like Jen's body, so I'm always envious!)  Here's a photo from her fantastic outing in Capri on a boat with her man.  What do you think? 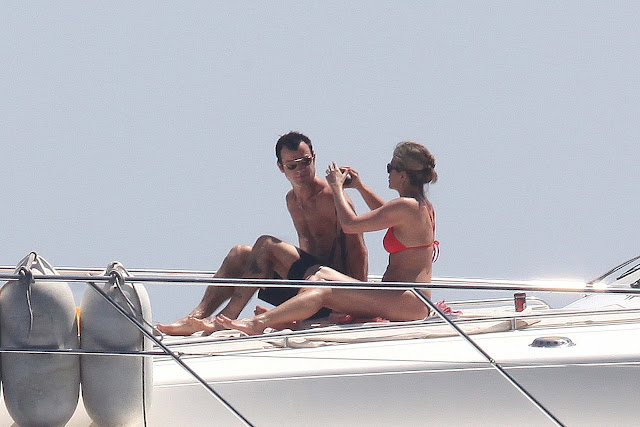 Oh, but let's not stop here with the speculation because Justin and Jen arrived back in LA and guess who is wearing a ring--a diamond ring?  Yes, she's got a rock on her right finger which really can mean everything or nothing.  It could be a ring she has had forever.  Have you ever seen this ring before in her wardrobe?  I know some of the Aniston sleuths out there are on the case.  The interesting thing I noted is that she reaches up for sunglasses in the photo.  Many celebs will do something like this to make an "unofficial" official announcement. Jen isn't one to make statements through the press like "I'm pregnant!", "I'm engaged!" unlike some celebrities. So, is this just a ploy to throw us off or is our gal, Jen, officially engaged to Justin Theroux?  Expect some heavy press on this one because there are going to be a lot of "sources" coming out of the woodwork on this story.  The press has been trying to marry and impregnate Jen for a decade. 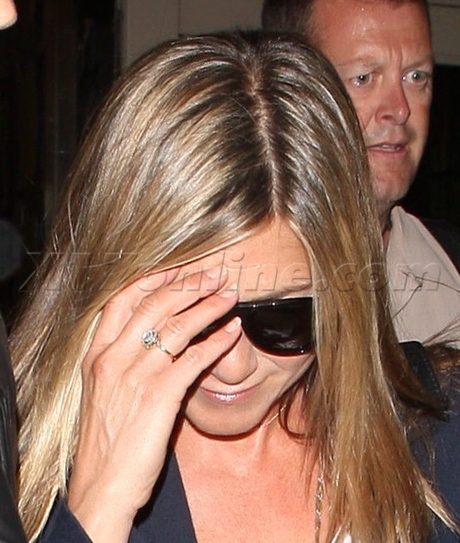 Okay, your turn.  Tell me what you think!  Let's start the debate.  This is also NOT the time to tell me she just got engaged because Angie and Brad got engaged.  Sorry, that ship has sailed and Jen and Brad have moved on.  No love triangle arguments, please.  Thank you!  You know what to do:  comment below, on Twitter, or on Facebook.

June 28th, 2012:  So this rumor is a bust since even E! hopped on the Jen engagement rumor mill and featured it in their segment, "So True, So False".  Thanks for all of your comments and helpful links.  We are all in this together.  Have a great weekend, kids!

July 20, 2012:  The Spreecast is officially happening!  If you have questions, make sure to RSVP and get your questions in here.  The live chat will happen Monday, July 23rd at 6:30PM PT/9:30PM ET for 30 minutes.  I will be covering the entertainment news of the day and answering your Aniston questions that I haven't been able to get to lately because I have
been working.  See you on Monday, this should be fun!

July 29th, 2012:  Remember, Monday is another LIVE broadcast at 6:30PM PT/9:30PM ET.  All of the information is here.  I also have several of your email questions that I will answer
and address.  I will see you tomorrow!

July 30, 2012:  I made an official call on the Baby Bump Watch on the show last night.  Here is what I said:  Spreecast archive.

August 12th, 2012:  Darn it!  I should have kept the Engagement Watch going, forget the Baby Bump Watch.  Congrats to Jen and Justin who are OFFICIALLY ENGAGED!  See the Gossip Cop item confirming the news.
Posted by Kristyn Burtt at 7:59 AM