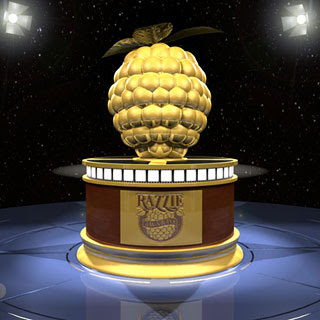 We were so busy covering the best in film a few weeks ago, that I almost forgot to bring you the worst in film for 2011.  It's the Golden Raspberry Awards also known as the "Razzies".  Now, they normally hand out the awards the night before the Oscars, but this year, the nominations happened on Oscars Eve and the official award date is April 1st.  Yep, April Fool's Day. With a plethora of bad films to choose from, who had the most nominations?  Oh, if you've been listening to me on Driving with Gass, then you know who I picked on in this piece.  Check out the nominations and my interview with founder, John J. B. Wilson:

Posted by Kristyn Burtt at 9:14 AM