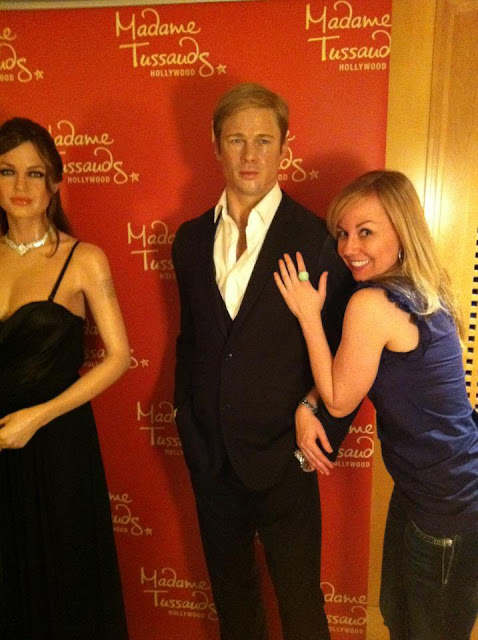 Day 2 has come and gone, but man, I am tired!  Can you imagine being a nominee during a week like this?   I don't know how they do it and still look pretty all week long.  Yesterday, I hit Roger Neal's Hollywood Style Gifting Suite and received the celebrity treatment.  What is it like to get all of those free gifts?  Take a look....

If you read my Day 1 post, I alluded to a bit of show gossip and I hinted that the group I saw getting credentials might mean that there will be singing at this year's show. (I named them in the tags.)  I sleuthed around and here's what I am hypothesizing for now....

1.  The group will be singing as a part of some tribute, perhaps during the infamous and always controversial "Hollywood Death" segment.  Sounds possible, but it's a group of kids singing, that's too morbid.

2.  How about this better theory:  They ARE featuring the two Best Original Songs from The Muppets and from Rio.  My guess is that the Muppets will make an appearance to sing because Miss Piggy and Kermit are already in the building to present an award.  The kids' chorus will be a part of the Rio song.  This would make me very happy if Theory 2 actually happened.

I did ask my insider sources to confirm this.  When I offered up my Muppets theory, the response was met with silence.  My other source could not confirm nor deny.  Hmmmm, am I on to something here?  What do you think, let me know in the comments below.
Posted by Kristyn Burtt at 6:29 AM