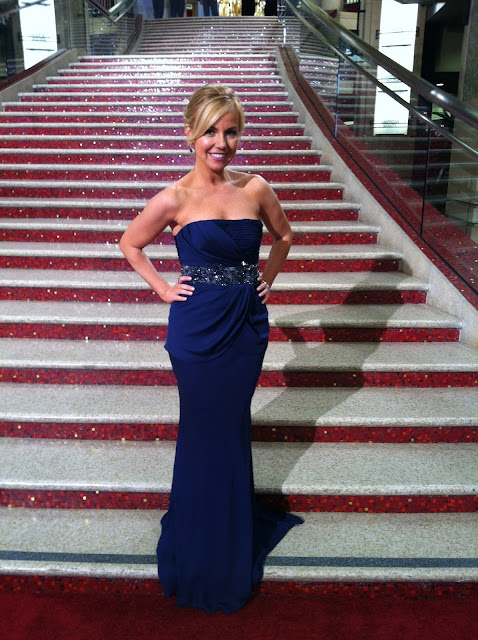 Like the Oscar Nominees Luncheon, I decided to give you my stream of consciousness notes.  My videos from the red carpet should be up in the morning. Make sure to check back for all of my big interviews....and trust me, they were big.

Tony Bennett called me sweetheart on the red carpet. Swoon.
Meryl Streep answered my question about the fabric of her sustainable green dress by Lanvin. 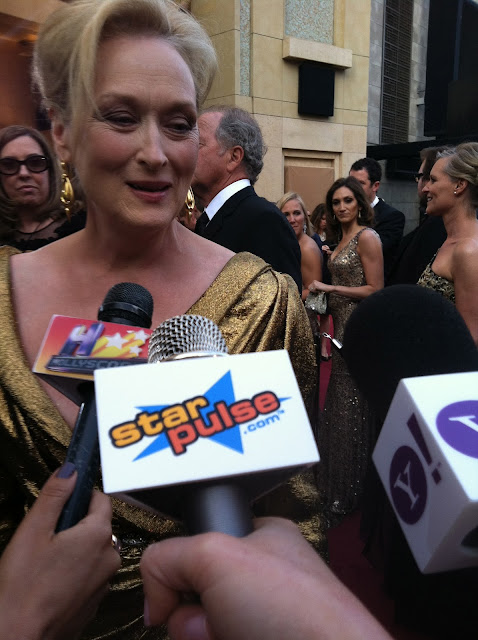 Michael Moore directly snubbed me.  Only one to do so.
Snarkiest answer.  Melissa Leo. It was a little rude.
Funniest encounter.....Edie McClurg.  She did a Joan and Melissa Rivers red carpet stunt with me.  I think we have a show idea here.
The Dictator was the biggest red carpet moment of the night.  Bigger than George.  Bigger than Brad.  I kid you not.
Tom Sherak, President of AMPAS, promised a show running at 3 hours.  Did he deliver? (Yes, he did!)
Sandra Bullock continues to be one of my top girl crushes.  She’s genuine, sweet, and just a gal you want to have a cocktail with.
Hardest thing on the red carpet was staying warm.  The sun went down and so did the temperature.  All of the ladies were shivering in their gowns.  Goosebumps were the hottest accessory on the red carpet outside of Stacy Kiebler. 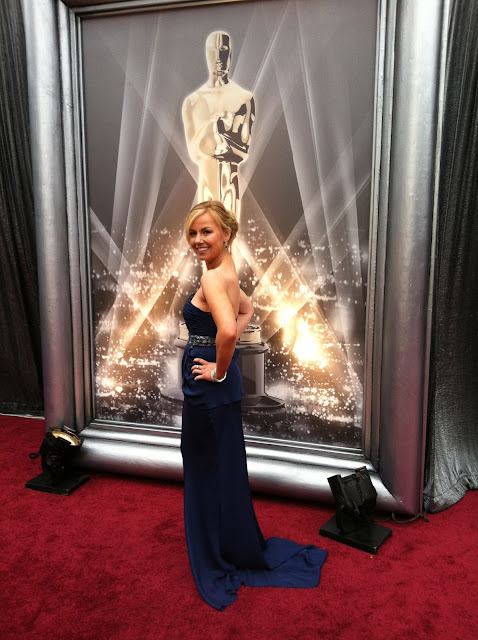 Hugo is dominating way more than anyone thought.....at least in the press room.

As much as I love Cirque du Soleil, their performances are best enjoyed in the theatre.  A Muppets performance is enjoyable by all.  Yes, I am bitter.......I want The Muppets to sing.


I snuck over to the photo room and watched Octavia pose with her Oscars.  Holy flashbulbs.  No wonder we are still waiting for her here in the press room....she lost her sight.
First F-Bomb of the night by the Documentary guys.  Guess Melissa Leo feels better.
My first snack of the night.....2 mac and cheese bites, 1 Tuscan chicken tender, 3 shrimp.  The cocktail sauce scares me a bit in my loaned Chagoury Couture dress.  Success!
George Clooney is a star. I don’t know what else to tell you, but this awards season has made me into a super fan.
Did you know when winners come into the press room to be interviewed, reporters have a choice to ask questions or put on headsets and listen to the show?  It can often be a Sophie’s Choice moment.
Emma Stone is funny.  She’s charming.  She also needed to wear a bra with that dress.
Everyone loved Chris Rock presenting and you want him to host.  Did you forget he was widely criticized for hosting in 2005?
The Academy provides librarians with Oscar history for reference materials.  I felt like an uber-Oscar geek when I asked a question.
First question for the Doc Winners:  What about the F-bomb? They said the F-bomb came from the heart even though he apologized to the press for it. Second question:  Wondering if they were trying to top Melissa Leo’s F-Bomb.  They are going to be remembered for the F-bomb.  Classy, guys, classy.
Thanks for passing out snacks to the Oscars audience. I’m hungry.....heading to the press room snack buffet.
Second round of food:  2 pretzel bites with beer cheese, 4 cheese tortellinis, and one egg roll that I didn’t get to eat since I dropped it in the tortellini tray.  Shhh.....don’t tell anyone it was me.
It’s quite an honor to have Christopher Plummer in the room.  Captain von Trapp forever!
It’s an hour later and we are still waiting on Octavia Spencer in the press room.  Just so you know, this is not her decision. It means she was held by production to return to her seat.  She might be needed in the audience if The Help is up for other awards that are coming up.  They do this for every nominee so there are five possibilities for each nominee should they win.
Christopher Plummer is still holding court and entertaining the press.  Big applause when he leaves.
Brett McKenzie is really cute.  So glad that he won after I made him sing on the red carpet.  “Man.....or Muppet!!”
How is it possible that “Rainbow Connection” never won an Oscar?  Blasphemy!
Michel Hazanavicius and Berenice Bejo were adorable on the red carpet.  Favorite new couple. And he thanked Uggie the dog....best thank you of the night. Uggie rules. 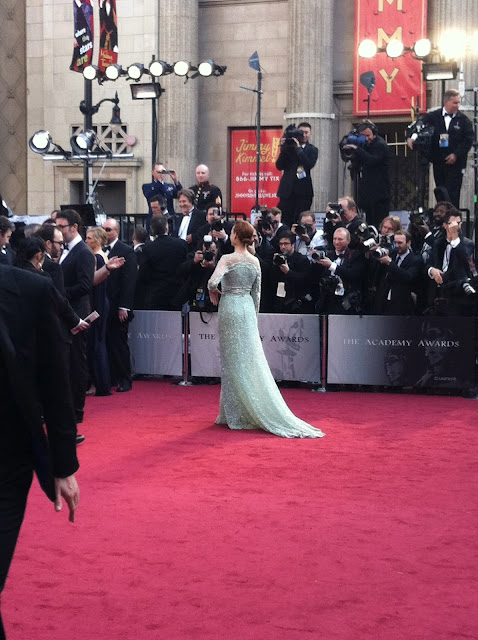 The back of Berenice Bejo's gorgeous gown.
I know you all love Oprah, but I love Dick Smith. Don’t know who he is?  Here you go.
8PM.....no Octavia Spencer.
Resting my eyes for a 30-second Oscar nap.  Okay, nap over.  Back to work.
Announcement comes over theatre loudspeaker.  They ask audience to NOT applaud during In Memoriam segment.  They don’t want anyone to be the most popular while dead.
Normally you have to die by January 30th to be included in the In Memoriam segment. I imagine they included Whitney Houston to avoid any post-Oscars backlash.
Hair call for me was at 6:30AM.  I am starting to feel the effects now despite two Cokes.
Oooo, just realized that the snarky reporter who sat across from me last year is three seats away from me.  I’ve missed her snark.  She loathed Natalie Portman last year.  She rolls her eyes at the screen as Natalie walks out.  By the way, Natalie's fiancé, Benjamin Millepied, was wearing a wedding band.  Did those two get married on the sly?  Discuss.
Interesting reaction to the Jean DuJardin’s win in the press room.  A mix of groans and shock.  I’m not sure I am shocked since even I predicted his win......I think we were all looking for The Academy to shake things up a bit.  Guess not.

If y’all haven’t seen Albert Nobbs.  Add it to your queue.  Touching performances and a wonderfully thoughtful film about relationships and love.  Very topical in today’s political climate.
Press room bursts into thunderous applause.  Meryl Streep wins.  I mentioned it on my Behind the Red Carpet segments a few weeks ago:  Academy voters are male, white, and over 60.....I said they would swing the vote....and they did.
I’d like to thank the Academy for the suprise.  We needed one tonight.  Go, Meryl, go.  Grab that golden knight and put it on your shelf.
The Artist wins......on stage and on the red carpet.  Their PR was in full force and very organized.  Thanks for making my job easy, Weinstein publicity.  It really is appreciated.
I missed the dessert table.  Good thing my Girl Scout cookies and Devil Dogs shipment from the East Coast arrives tomorrow.  Yes, this was done on purpose.  There is no fat in Oscars.
Guess who got sunburned at the Oscars?  Oh me.  Red carpet hazards.
The shouting begins in the room next door.  Guess Meryl, Jean, Octavia, and Christopher have arrived.  Still waiting for Octavia to arrive.......
Guess what, Octavia is here!  She’s asked that The Academy keeps the Q&A short.  Um......it’s part of your job and you just won. I’m not sure how I feel about that request.
She’s pleasant and she’s here a long time.  Guess it was her publicist's request.  Make sure to have a nice publicist.  It reflects upon your reputation with the press.
A reporter asks her about the physical makeup of the voting members of The Academy which is primarily white, male, over 62.  She cuts off the question and says, “I don’t want to get on that bus”. Laughter abounds in the pressroom.
Another reporter asks Meryl if she is gunning for Katherine Hepburn’s record. “Oh, she has more?”  “Four” says the reporter.  ‘Oh”, says Meryl.  Hilarious.
She’s very moved that her makeup artist, J. Roy Helland, won on the same night she did.
“Never give up” is her advice to women.  I like it.  Simple, but true.  Meryl's words of wisdom.
“But I’m so thirsty”. She says this before her final question.  Haha.....she wants alcohol.  My kind of gal!
What did you see when you first saw the margaret Thatcher makeup?  “I first saw my dad.  Maybe my dad looks like Margaret Thatcher”.
Jolie-ing the leg is a new verb.  Adapted Screenplay winner, Jim Rash:  “We have exactly the same legs and I wanted to show everyone.  It was a loving tribute”.  I'm not sure Angie saw it that way, but use it in a sentence at work tomorrow.
Alexander Payne is talking about his next film.  I really enjoy his films, so I hope I don’t have to wait five more years for another Payne film.


I had 64 bobby pins in my hair tonight.