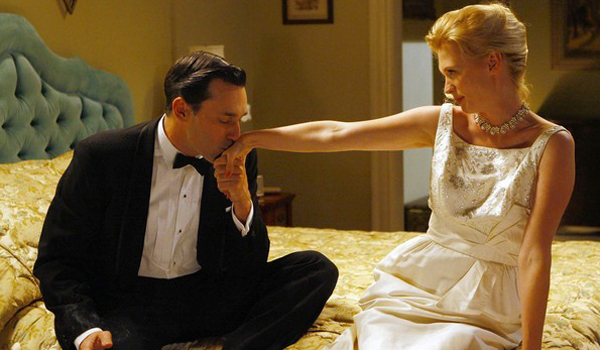 It's very rare that I love a show to its core:  Sex and the City (SATC), Gilmore Girls (GG), and Mad Men. While I can watch SATC and GG in its entirety in reruns and from my DVD collection, I am left hanging from Season 4's finale with Mad Men. Yesterday, AMC and Matt Weiner announced that I have to wait until 2012. The rumor I heard from an inside source is that March 2012 is the earliest we will see the show.  So, they are telling me it's okay for fans to have to wait 12 months until a new episode is revealed and the answers to my questions are resolved.  Is anyone else worried about Don Draper?  He was in the middle of an alcoholic breakdown!  What about Peggy?  She's so strong, yet so secretly fragile.  And Sally Draper needs some guidance!  Heck, by the time they start filming Mad Men again, Kiernan Shipka (Sally) will have grown six inches. So, in the meantime, I am in mourning.  I guess I will Netflix Seasons 1-4 and milk every episode until Don Draper pours another drink and enters my living room with a swagger.

2. Mad Men Monday--some fun places you can find little Mad Men nuggets of information from QVC to my interview with Kiernan Shipka at the Saturn Awards.

3. Emmys, Part 2:  Photos with my favorite gal, Kiernan Shipka, at the Emmys gifting suite.  Maybe I will run into her again during the Kids' Choice Awards gifting suite?  I will keep you posted on any Mad Men sightings.

Now the big question is:  What are you going to do with your Sunday nights this summer/fall?