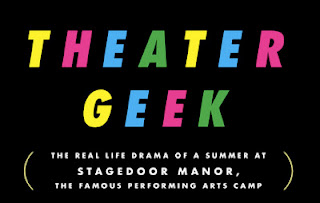 I just finished the book, Theater Geek, by Mickey Rapkin on my flight from JFK to LAX on Saturday night.  The book follows a summer at the infamous theatre camp, Stagedoor Manor.  The camp has become legendary due to its famous alumni, feature film, and documentary.  I was lucky enough to attend the camp in the late 1980's.  Here is my story.....

In the summer of 1987, I headed off to the Catskill Mountains in New York.  I had a lousy year in school because I didn't feel like I fit in.  Kids my age liked to play soccer and basketball.  All I wanted to do was sing and dance.  I spent hours upon hours in a dance studio while my peers were hanging out at the mall slurping Orange Julius.
My mom was looking into summer camps for my brother, who pretty much wanted to stay at home and hang out with my mom, while I was looking for a change.  I wanted something different where no one else knew me, a place where I could fit in.  I searched through the back of the Boston Globe Magazine under the summer camp listings.  I sent away for two brochures:  Space Camp and Stagedoor Manor.  Since I hated roller coasters that go upside down, space camp was ruled out pretty quickly.  I decided that six weeks at Stagedoor Manor was the exact remedy a theatre geek like me needed.

Indeed, it was.  I don't want to bore you with all of the details of my magical summers there because I know that some of the stories will be too personal or filled with insider jokes only reserved for Stagedoor alumni.  I mean, can you imagine sending your kid to a camp where the music director yells, "Sopranos, you sound like you have SYPHILLIS!"?  Yep, it was a different kind of camp and that quote was a little too insider, but I LOVED every minute of it.  To understand what I am talking about, read Rapkin's book. It will give you detailed chapters about the camp from inception to its current incarnation.  Everything came flooding back to me like it was yesterday:  memories, nostalgia, friendship, owners Carl and Elsie Samuelson, the beloved theatre director, Jack Romano, and my favorite musical director of all time, Michael Larsen.
I have kept in touch with many of my fellow campers from the girl who sang next to me in Pirates of Penzance to the little boy in denim overalls who performed with me in Working to all of my friends whom I have reconnected with on Facebook and who clearly remember the days when my hair was in its natural state of red.  This summer camp was the answer to my awkwardness and it gave me a sense of belonging.  I lived there, I breathed there and I carry that with me into 2010.  I sometimes forget what an impact this place had in my life, but when I run into a former Stagedoor camper, there's a sense of comfort.  They more than understand the magic that is Stagedoor Manor.  (And a big thanks to Mickey Rapkin for bringing all of that back to me--READ his book!)

If you want to see a great video about the camp, check out a post I did this summer on the CBS News piece. (I even make a cameo!)  I'll see you tomorrow with highlights from my lightning fast trip to NYC to host Women's Health Magazine's Are You Game? at Pier 46 over the weekend.

Posted by Kristyn Burtt at 7:43 AM