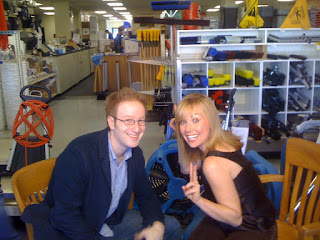 I figured today's selection for Web TV Week was perfect since Jeremy Redleaf won the Streamy Award for Best New Web Series last night at the Craft Awards at The Barnsdall Gallery Theatre.  I was just talking about Jeremy yesterday morning on my walk to work with my co-host of Toyota Live.  I had sent him Jeremy's Tubefilter article on the Canon 7D and I was telling him a bit about the story behind Odd Jobs.  Well, Jeremy certainly has had a fantastic year with a big win at the New York Television Festival that included a deal with FOX Television Studios' 15 Gigs.  Don't forget, Jeremy isn't a day over 26, so it really is quite an accomplishment.  Congratulations, Jeremy!

Find out how this year's Streamy winner for Best New Web Series got started with Odd Jobs in The Web Files interview: Odd Jobs

Also, check out the supplemental interview with Gabe Marano and Ilsa Berg of 15 Gigs about Jeremy's win at NYTVF: FOX Television Studios'15 Gigs

The Behind the Scenes Blog with Odd Jobs.

The Behind the Scenes Blog with 15 Gigs.


Congratulations to all of last night's winners!
Posted by Kristyn Burtt at 3:00 AM