Live from the Streamys Red Carpet! Have you heard any news on the Streamy Awards lately?  I am going to leave the comments, thoughts, and apologies to others. Instead, I am going to give you all of the action from the red carpet on the night of the Streamys where I had three jobs all in a span of two and a half hours.  It was fun, chaotic, and exactly where I wanted to be that night--in the middle of all of the action!
So, I had been really busy working in NYC all week, so I missed the parties of Web TV Week.  I took the last flight out of JFK to LA and landed at midnight.  I managed to grab some sleep around 2 AM only to wake up at 8 AM to start the usual red carpet beauty regime:  mani/pedi, hair, and makeup.  It takes a village to assemble my wardrobe and all of the accessories.  By the time I arrived for my official red carpet rehearsal, I was running solely on adrenaline.  Here's a rundown of how the pre-show happened:
1:30PM Arrive for rehearsal with the hosts of the live Ustream feed.  Mark Malkoff, Cyndee San Luis, and I had an opening skit to go over before the first arrivals at 2:30 PM.  We practiced our lines in the IKEA bed, which the warmest place to be.  I realized I was severely underdressed for the 58-degree weather that day.  All I could think about was my stylist, Katelin Flanegin, telling me to have the tailor shorten my dress by an inch and a quarter because she wanted to see more leg.  Ha!  Now, I wanted that fabric back to stay warm! 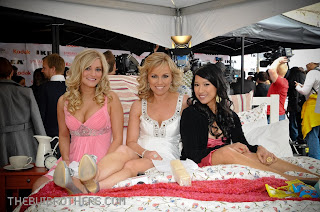 2:15 PM iJustine joins the group to rehearse the rest of the live feed open with us.  Okay, who thinks she looks a bit like Kristin Chenoweth? (Or Sophie Tilson?  Or mememolly?)  Call me crazy, but there is definitely a resemblance in person.  Regardless, she looked gorgeous in her coral pink dress and she was game for anything.  That's my kind of gal!  Sketch rehearsed and we were ready for the red carpet to open. 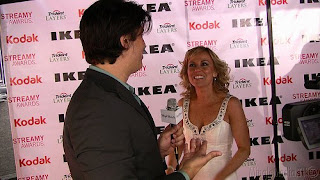 2:30PM Remember I said I had three jobs that night?  Well, it was a race down the red carpet for me as a nominee.  One of the publicists from Rogers and Cowan escorted me to the photographers' area.  If you have never heard what it is like to be directed from every angle, check this short clip out: "Kristyn, to the right.  Don't look at them, look at me, left. Show us the front of your dress.  Over here.  No, over here."  Good luck figuring it all out because I was moving in every direction.  Then it was down the interview line....LA Weekly, Actor's Reporter, Mingle Media TV, and Slebisodes.  I tried to follow my own rules while being interviewed:  Keep it short, keep it funny, and give a good sound bite. Did I succeed?
2:45PM I was pulled off of the red carpet as a nominee by The Web Files PA/Renaissance woman, Jennifer Bobiwash, to head back to my position on the red carpet as the host of The Web Files.  We grabbed some early interviews with the cast of Safety Geeks: SVI, Brett Register and his adorable girlfriend, Jamie Blair, and Cathy Baron.  I had a really genuine moment with Craig Frank off-camera that really captured his feelings as a nominee.  He has had a very big year and it all culminated to this moment on the red carpet.  It truly was great to see so many people we have interviewed on The Web Files be a part of the celebration.  It is also always fun to work a red carpet as a fan.  I think I scared Robin Thorsen of The Guild by grabbing her and whispering that she was my favorite on the series.  She whispered back, "You're my favorite too.".  That made laugh since I know she has no idea who I am, but she sure is quick with the quips. 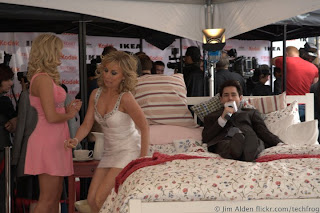 Definitely my most awkward and hysterical picture of the night. Yep, the dress was short and the descent off of the bed was challenging.  Photo courtesy of Jim Alden.
4:00PM The live stream begins!  I hop in the IKEA bed with Mark and Cyndee as we open the show with our skit with iJustine.  It all goes off without a hitch even though I had a little trouble getting off of the bed gracefully.  I run to my Web Files position, which is now my Ustream position, and I am ready for Job #3!  At this point the red carpet is a bit more crowded (It truly was my Twitter page coming to life on that red carpet!) and I sometimes jostle for my position so people will get out of our shot.  Aggressive, perhaps, but I am girl who wants a clear shot for the show and everyone being interviewed.  I open by interviewing the cast of Oz Girl and the hour flies by.  I have to pass many people over because Mark in the IKEA VIP area has already interviewed them, so I received a few quizzical looks as to why I was skipping some of the nominees. I don’t think they realized I was live streaming with my Web Files microphone flag.  Three days later, I am trying to remember all of the people I interviewed from Jeffrey Hayzlett of Kodak to Bernie Su to Elisa Donovan to the cast of Gold and Elevator to Taryn Southern and Dennis Haskins.  It was a blur. Every time I finished with one, I had to prep for another.  No time to even refresh the lip gloss or grab a sip of water. 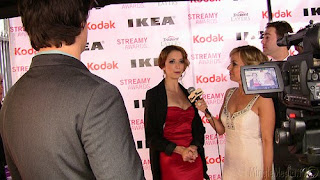 Interviewing Taryn Southern.  Photo Courtesy of Jeff Rago.
5:00PM I got the word that we were officially done and we finished right on time.  The red carpet was a complete adrenaline rush, but incredibly fun.  The best compliment I received that night came from Michael Tapp, who said, “- You looked like you were hosting your own party on the red carpet.”  That is exactly what I wanted to hear, so thank you!  Finally, I ran around looking for my date who was stuck outside the red carpet line without a ticket or a place to go.   With my date in hand, I headed into the theatre as a nominee.
Congratulations to all of the winners of the 2nd Annual Streamy Awards.  The Web Files saluted the winners of the Craft Awards in last week’s episode.  Be sure to check out all of the red carpet action at the Orpheum Theatre later this week in our next episode.


P.S.  Like all good red carpet reporters, I went to In-N-Out after the show and ate a delicious cheeseburger: 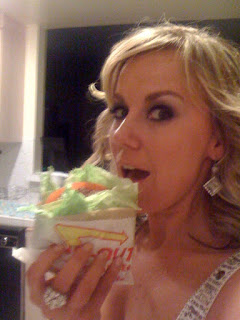 Many thanks to Mathieas McNaughton for giving me the opportunity to write this article for Web Series Today where it was originally posted.  Be sure to visit his site for the latest in web series news. (and tell him KB sent you!)
Posted by Kristyn Burtt at 6:12 PM