The Streamys: I Lost, But I Won 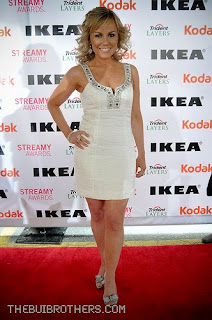 After a long, hectic month, it's all over.  Back to back to back jobs on the East Coast and The Streamy Awards blurred by.  I tried to take it all in, but I think I was running solely on adrenaline.  How did I do?  Well, I lost in my category for Best Web Series Host, but I was thrilled at who did win, Zadi Diaz.  My admiration of her work has been spouted a few times by me (Behind the scenes of Epic Fu) and I told her again on the red carpet last night.  I think it is important for women to support each other in their field and Zadi is out there and creating solid content for the web. So, when her name was called, I was happy.

1.  I was so thrilled to be co-hosting the live feed of the red carpet for Ustream with Mark Malkoff and Cyndee San Luis. It was an honor to be asked and I felt totally in my element last night. I could not have survived without the amazing talents of Jenn Bobiwash who kept it all together for me (including manning my iPhone texts so my boyfriend could find me.) and Ken Burden who made sure every shot was perfect for the show.  I had fun interviewing everyone and I hope you had fun watching the feed.

2.  I loved what I was wearing and how my hair and makeup looked, so I felt like "me" all night.  I wasn't fussing over my dress or tugging at my hair.  That is all due to the amazing contributions of my stylist, Katelin Flanegin, and my makeup artist, Melissa Anchondo. They understand my personality and they know what makes me feel good.  I appreciate their talents and contributions to make me look WAY better than I look in real life.

3.  I have been away from home for a long time:  130 days, 14 cities, and a challenging year for the company I represent .  My boyfriend took care of the renovations of the condo, the animals, and the day-to-day chores at home.  Last night was the first night I got a chance to spend time with him, get all dressed up, eat In-N-Out burgers, and hang out on the couch with our little family when it was all over. It was a GREAT night.

4.  One of the most exciting moments of the night?  Watching Rachael Hip-Flores of Anyone But Me win for Best Female Actor in a Drama Web Series.  She was sitting behind me, so I saw the emotion and excitement on her face up close.  It was worth the price of admission.  A few "Oh my God, seriously, and reallys?" were heard from Rachael as the writers from the series, Susan Miller and Tina Cesa Ward, raced down the aisle with congratulatory hugs. It was so genuine and thrilling to watch because I don't think she expected to win at all.  That's what the Streamys should be about.

4.  The support from family, old friends, co-workers, new friends, Twitter friends, etc, was tremendous.  I appreciate you and all of the messages, it helped get me through the long month on the road.

5.  Finally, to Sandra and Perry Payne who helped produce the red carpet last night. Without them, there is no Web Files and there certainly is no nomination for Best Web Series Host.  I cannot thank them enough.

So, while I may not have walked out The Orpheum Theatre a winner on paper, I was a winner in so many other ways last night.


Photo courtesy of The Bui Brothers.
Posted by Kristyn Burtt at 10:25 AM