Man, I am tired.  Today was my first true day off and I was still at a meeting about my next show with Dance Channel TV.  Here's a wrap-up of everything that happened Post-Streamys:

Wednesday:
Ghostfacers premiere at La Vida, Hollywood.  Ghostfacers is a new web series that is currently on CWTV as a spin-off to their broadcast show, Supernatural.  I actually had the chance to attend as a guest versus covering the event.  That was a nice break for me and I ran into fellow Streamy nominee, David Nett and his lovely wife, Shannon, from the series, Gold. 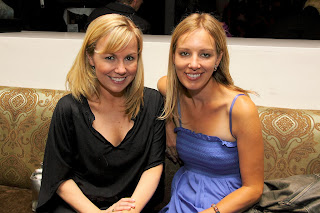 Me and my pal, Maria, just moments before the start of Ghostfacers.  Photo Courtesy of Fitz Carlile.

Thursday:
Celebrate the Web.  A fantastic night honoring the winners at the 2nd Annual Streamy Awards.
Sandeep Parikh kicked off the night with a great speech about net neutrality and the night kept going with a hilarious video by Jeremy Redleaf of Odd Jobs.  Thanks to Jenni Powell and Kim Evey for arranging such a special evening. 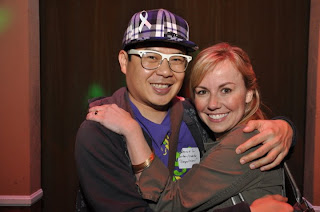 Me (wearing too much bronzer!) and Streamy winner, Bernie Su, at Celebrate the Web.  Photo courtesy of Bernie Su.

Friday-Sunday:
Off to the races....literally!  I was emceeing over at the Toyota Grand Prix of Long Beach.  Brian Austin Green won the Pro/Celebrity Race, I hung out with the coveted PHV Prius, and I ran into this guy...Arrrrr.....: 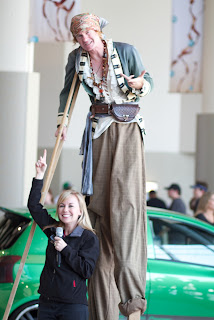 Me hosting (without my signature red dress!) for the Toyota Grand Prix of Long Beach and a very tall pirate.  Photo courtesy of Matthew Troyer.

Monday:
I woke up to a fun surprise from Michelle Denise Norton of Blink Kitty Love.  She animated me into her latest episode and I have to say, it really does look like me. Can you spot my cameo?  It involves some of my favorites:  cheeseburgers and french fries.

Bonnie Gillespie of The Actors Voice wrote a few nice things about my work on the red carpet. (Thank you, Bon!) Be sure to check out her weekly column. As a casting director, she has some of the best advice in town.

Finally, if you are in LA and know of some good dance events in Hollywood that need coverage, hit me up in the comments section below.  I am working on a new project with Dance Channel TV and we want to hit the hottest sets, red carpet premieres, and shows in LA.  I would appreciate any leads with publicists or dance agents because we are ready to bring the best in dance to you!
Posted by Kristyn Burtt at 10:24 PM