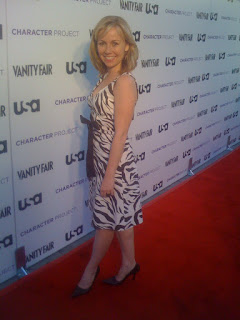 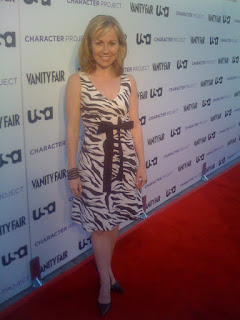 Hey Everyone!
We are going super simple with today's outfit.  It is another dress from the archives, but this one has served its purpose over and over again.  I wore it to cover USA Networks and Vanity Fair Magazine's Character Project launch on May 14, 2009 which featured the works of several photographers honoring the diversity of the US.  A more sedate and classy affair called for something a little more proper.....meaning a lower hemline.
This dress has officially been retired.  In fact, I am not sure I can even wear it anymore in my personal life.....it has hit the red carpet, a wedding, on-camera (twice!)-once for Focus Hollywood and another time for an AOL/Purina TV show I hosted, and a book launch party for Hollywood exec, Sam Haskell.  Time to sell it on Ebay?  Regardless, the dress came from an amazing store in Hollywood called DNA.  They sell fabulous dresses for great prices and they even offer coupons via email for 20% off from time to time.  I believe they also have a location in Venice for you beach-dwellers.  The shoes?  A good, old standby:  Nine West.  They are simple, versatile, and affordable.  The accessories?  An H & M bracelet and set of gold earrings.
The night itself was low-key and offered a variety of USA Networks stars like Corbin Bernsen, Hector Elizondo, Mary McCormack, and Tiffani Thiessen (Yay, 90210!).  In addition, an Oscar winner stopped on by, Marisa Tomei, as did Chris "Ludacris" Bridges who was the host of the evening.  You can see all of the footage here:   http://tiny.cc/lMJwa
Just a few more days of archives and then we are headed for original material again.  I have a red carpet event on Friday for the Inspiration Awards.  What will I wear?  Find out later this week on the Red Carpet Closet!
Reporting Live from Los Angeles,
KB
PS  Don't forget to follow me on Twitter!  Just look for "KristynBurtt".
Posted by Kristyn Burtt at 6:41 AM