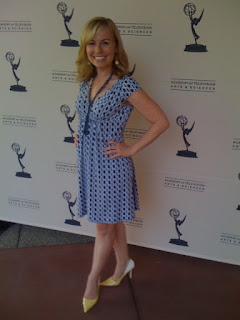 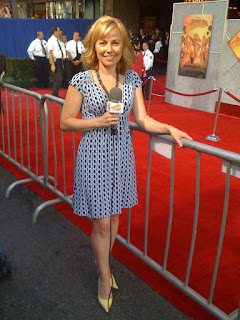 Hey Everyone,
I am back! It was an insane week filled with red carpets, press junkets, and entertainment panels. On Thursday, I hit the red carpet for the Television Academy of Arts and Science's Father's Day Salute to TV Dads. Yes, that is a mouthful, and my trusty sidekick and cameraman, Trent, will tell you I had trouble with that in the opening segment. I think we did 12-15 takes while I stumbled through that title. I have to say that it was a couch potato's dream to be interviewing timeless TV dads that I grew up with....from Dick Van Dyke to Dick Van Patten, Stephen Collins to Jon Cryer. What a night!
What a night and what to wear? Well, I dug out a dress that I am officially going to have to retire to the dusty corner of my closet. I have worn it on two red carpets, the Beverly Hills Chihuahua premiere and the TV Dads celebration....oh, the horror! I broke the rule of wearing something twice on camera and I had the nerve to have the same hairstyle each time. So, I promise, this will be the last time you see it......I think. The dress is an empire waisted design by one of the best petite clothing designers out there, Laundry by Shelli Segal. It has a white and blue pattern throughout with cap sleeves and it has a hem hitting just above the knee which eliminates the "House" red carpet dress issue.
My shoes are a find from Aldo and people either love or hate these shoes. I love them with their yellow tie-dye effect by the pointy toe that dissipates to completely white in the back. Since I always need my height, this is another high heel at 4". (And by the way, I always wear flip flops to and from the event. 4" heels are almost impossible to walk in for more than an hour.) The circular yellow drop earrings were an impulse purchase as well from Aldo. The fantastic salesman at the store told me I MUST have them to accessorize with. I had "Sucker" written all over me that day, his commission increased, and now I have a fun pair of yellow earrings in my jewelry wardrobe. Finally, the blue coral necklace was a souvenir from my trip to central Mexico a few years ago. If you haven't been to San Miguel de Allende, add it to your list of places to see.
Now, let's get to the good stuff, the interviews on the red carpet. What a dream! My friends and I spent years watching Stephen Collins AKA the HOT Reverend Camden from "7th Heaven". He kindly listened to my story about "7th Heaven" character cupcakes that were made for the series finale party. I think I convinced him I was somewhat normal and not a crazy fan with a microphone. The classiest man on the red carpet was Patrick Duffy. The gentleman took time to shake everyone's hand, get their names and introduce himself. The reporters always get introduced, but it is rare that a cameraman is ever considered. Patrick said "hello" and "goodbye" this way. All celebs should take note, it is just classy. I know I should have been more geeked out about Dick Van Dyke especially since I love "Mary Poppins" and "Chitty Chitty Bang Bang", but it is Marion Ross AKA Mrs. Cunningham from "Happy Days" that left me speechless. I asked her what it was like to be one of TV's most endearing moms. She said it was fantastic and that "she raised us all". Yes, indeed, Mrs. C, you did.
All of the footage can be found here: Focus Hollywood Thanks for your continued feedback. Next up, the choreography panel for So You Think You Can Dance, High School Musical, and the 81st Academy Awards. I didn't wear anything special, so I will just give you the rundown on the incredible night!
Reporting Live from Los Angeles,
kb
Posted by Kristyn Burtt at 8:27 AM