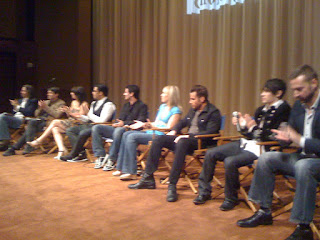 **Update: June 25, 2009**
This article was written on Monday, June 22, 2009. Michael Jackson suddenly passed away from cardiac arrest on June 25, 2009. He was a part of many dancers' childhood dreams of performing on the stage. May his music live on and may his soul continue to dance.
R.I.P., Michael
On Friday night, I had the opportunity to attend Dance Camera West's Choreography Media Honors. What a treat for choreographers, dancers, and dance aficionados! The panel consisted of the top creative teams from "So You Think You Can Dance", "The 81st Annual Academy Awards", and "High School Musical". The night was moderated by Daniel Ezralow, choreographer for the upcoming Broadway show, "Spiderman".
Highlights from each of the shows/choreographers:
SYTYCD: The spotlight was really on this show during the panel. Matthew Diamond, director, Tabitha and Napoleon, choreographers, and Tyce Diorio, choreographer. It was fascinating to hear that choreographers only get 4 and 1/2 hours of rehearsal time with the dancers before the show. Tabitha mentioned that they are literally calling out reminders and instructions as they are walking out of the studio. SYTYCD is a game show, so it is regulated by the FCC and all contestants must have the same amount of rehearsal time to make it fair to everyone. A few audience members wanted to know why the dancers didn't have the same type of launching pad as the "American Idol" contestants. It does seem that the SYTYCD winners seem to fade into obscurity while America still knows the names of Kelly Clarkson, Carrie Underwood, and Jordin Sparks. Napoleon felt that the dancers do the show because they love to dance, they don't care about being a star. Tyce mentioned that the show is only a springboard or a beginning then the reality of the dance world sets in. I think it has to do with the bottom line......$$$$. The producers make a ton of money off of these kids, put them on tour, and then throw them to the wolves when they are done. No preparation for what is about to happen or not happen to them. The producers don't look back because they have another season around the corner. Harsh, no? I even had a chat with a true insider, but I promised that our entire conversation would be off the record. And so it remains, off the record, but wow......it makes you think twice about reality/competition shows.
The 81st Academy Awards: This panel was fascinating since it consisted of Marguerite Derricks, choreographer of Hugh Jackman's opening number at the Oscars and John Palermo, producer and partner to Jackman's Seed Productions. This was probably the most interesting to me due to my work at the Kodak and the years I have worked the Meet the Oscars exhibit. I love this show and it fascinates me to see how all of this work comes together for one night only. Maguerite expects a lot from her dancers by not tailoring her movement to them. She expects them to be able to do her movement from the first audition. While John works in a producing capacity, he really has an eye for what works in terms of choreographing for the camera. Movement created for the stage is one element, but movement for the TV cameras adds an entire new dimension. Maguerite has a lot on her plate with the new Broadway show, "Wonderland", and the remake of "Fame" coming out in September. (Look for a 2 1/2 minute pas de deux in the Graduation scene of the movie. Woo hoo!) And, dancers, if you are looking to work with Maguerite, she is now finding Los Angeles dancers more versatile than New York dancers whom she thinks sometimes get stuck in a rut with one style after performing in long running shows.
High School Musical: Representing the HSM trilogy were Charles "Chucky" Klapow, Co-Choreographer, Mark Hofeling, Production Designer, Barry Rosenbush, Executive Producer. Well, I feel like the tide has finally turned on the HSM trilogy. The heat of this series has peaked and there were fewer questions for this group, although it was interesting to hear how Mark Hofeling put together an amazing set that was both utilitarian and safe for the dancers. Surprisingly, HSM 4 is coming our way. Sigh. I expect it will be a new crop of faces as most of the core cast has gone on to bigger and better projects. Keep your eye on Chucky Klapow, everyone. He is a rising superstar who is assisting Kenny Ortega with Michael Jackson's big comeback tour in London. If Jackson delivers, I think we should all expect a US comeback for the King of Pop. While we may be exhausted from his tabloid antics over the past decade, remember many of you ran home to see "Thriller" on MTV each afternoon. The King of Pop sure knows how to dance.
The one final tidbit I want to leave with you......SYTYCD fans, the Katie Holmes rumor is true. She will be performing a number from "Summer Stock" that was choreographed by Tyce Diorio. Don't let the tabloids fool you into thinking Nigel Lythgoe had anything to do with it. Let's give credit where credit is due.....go, Tyce!
Thanks for joining me for this special edition of Red Carpet Closet. Who cares what I wore? It was all about dance!
Reporting Live from Los Angeles,
Kristyn
PS If you enjoyed this special report, please follow me for the Can't Miss List on Dance Channel TV.
Posted by Kristyn Burtt at 9:39 AM