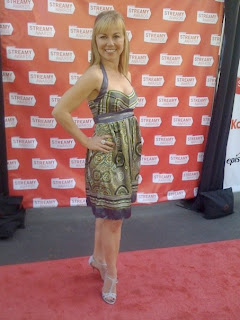 Hey Everyone,
Here we are with another edition of Red Carpet Closet. It has been a quiet week for me on the red carpet, so I am digging into the March archives. The Streamy Awards. This was a pretty amazing event honoring the best in Web Television. If you haven't watched a webisode on the internet yet, hit me up in the comments section and I will recommend a few shows to you. This was the first annual Streamys and everyone in the industry came out to celebrate an emerging industry. Another first? They streamed the red carpet on the internet so people from around the world tuned in to check out the festivities. Can you imagine the Academy Awards doing that?
Since I got hired for this job at the last minute, I had no time to find a dress. I went straight to my friend, Ali North's, closet. As a former Miss Mississippi 2003, she has a plethora of dresses for me to chose from. Now, I couldn't tell you for the life of me the name of the designer on this dress. If any of you recognize it, let me know so I can add it here. Otherwise, it was a really cute silk and jewel-toned dress that worked perfectly for the evening. It was the right length and halter top works well on almost any body type. I accessorized with my beloved silver Guess sandals and my Aldo Accessories cubic zirconia ring and bracelet. For red carpet accessories, Aldo is a standout in terms of price point and style. So, voila.....an outfit put together in about 10 minutes. Simple and easy as fashion should be.
Now to the interviews.....this red carpet was busy and a bit chaotic at times, but oh, did I have fun that night. My first interview was with
Rachael Robbins, one of the vixens from the soap-spoof,
Horrible People.. Take a look......
My next interview almost made my head explode. I spent most of the 90's watching "Saved by the Bell" on Saturday mornings on NBC. Screech, Kelly Kapowski, AC Slater, and Zack were my guilty pleasures. Well, look who showed up on the platform next? None other than Dennis Haskins(AKA Mr. Belding) and the cast of Private High Musical. This cast is wildly talented as they sing and dance their way through a raunchy romp of a high school. If you think Dennis is square, think again......he plays a teacher who has inappropriate thoughts about his students. Private High Musical was created and written by the incredibly talented, Taryn Southern.. Be sure to look out for them because MTV has ordered up a pilot with this crew.

Oh, you may recognize my next interview. Yep, it's a "Friend". At this point the red carpet was heating up and I got thrown up to the platform. You will see the crowds behind us, but watch as I introduce myself to the rest of the cast of Lisa Kudrow's show, "Web Therapy". We were flying by the seat of our pants, so the first time I laid eyes on them was the moment I put the microphone in front of them. "Web Therapy" has recently been in the news because it has been announced that Courtney Cox will star in an episode in Season 2.

Last, but not least was the cast and creator of "The Hayley Project" starring Rachel Risen. This cast was a blast and they only gave us a minute to interview them since it was the end of the red carpet and just about the start of the awards show. I tried to cram in as much information on the web series as possible. You can see my mind racing as I say "I love it" at least four times to keep the interview moving. Ah, the life of an entertainment reporter. I do hope to interview this cast in the future for my upcoming web show, "
The Web Files". And yes, it's true, they did promise me a steak dinner if they won for fan favorite. Alas, it didn't happen.....but I am betting on next year, kids!
I will be back in the next couple of days with an entertainment panel on the future of 3-D film and Episode 3 of "The Web Files" which is launching SOON! I can't wait for all of you to see it.
Reporting Live from Los Angeles,
kb

Posted by Kristyn Burtt at 1:49 PM