Conan O'Brien and Some News! 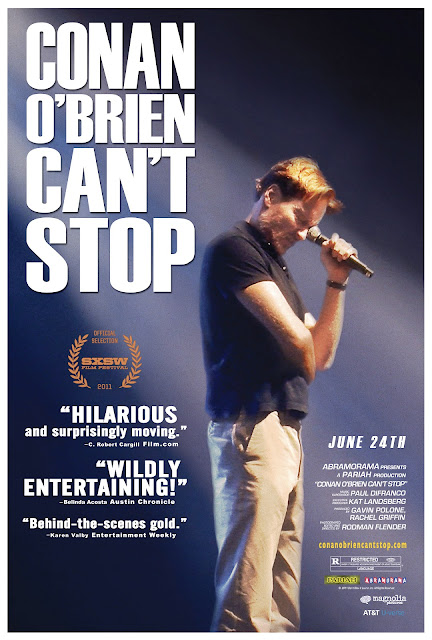 Last weekend, I had the opportunity to catch Conan O'Brien's new documentary, Can't Stop.  In 2010, I was riveted to The Tonight Show drama started by NBC by originally pushing Jay out, putting Conan in, only to turn around and push Conan out to put Jay in.  Did you follow all of that?  If you missed one of the greatest nighttime soap operas of our time, be sure to catch up with an excerpt from Bill Carter's book, The War for Late Night.  After Conan was publicly kicked in the teeth, he went out on tour.  The documentary became a cathartic, sad, angry, and funny journey for the comedian on how to rebound when life sends you down a path you never intended to take.  How do you pick yourself up?  Well, Can't Stop will show you how.  It's in very limited release throughout the US. In fact, it's playing in one theatre in LA only one time per day:  9:20 PM.  I guess they figure his fans are a late night type of crowd.  Don't miss it and add this documentary to your 2012 Academy Awards nomination watch list.

So, Conan's documentary was a great reminder to persevere even when the deck is stacked against you.  A few months ago, I entered a search for new faces for iVillage's iVoices.  It was a great opportunity video blog or vlog on a terrific site owned by NBC/Universal.  After doing my initial essay, I was asked to submit a video about myself, my interests, and what was happening in my life.  I worked really hard on my submission even though it was a tad long. (Oops!).  I wasn't selected and I was kind of bummed about it.  Fast forward to yesterday:  I received an email from Kelly Wallace, the chief correspondent over at iVillage, asking me to cover one of their press junkets for the upcoming Ryan Reynolds/Jason Bateman film, The Change-Up. Would I like to do it?  Would I?  OF COURSE!  (I snuck my host reel in with my personal video submission.  I was a little worried about doing that, but it was a risk that paid off.)

I am thrilled to be joining the iVillage team as one of their on-air correspondents.  This will be a trial run for me, but I am going to work so hard on this piece because I really want to be here.  I've been a fan of the site for a long time and I am overjoyed at the opportunity.  I will keep you posted on my upcoming coverage.  I couldn't have done it without all of you watching, reading, commenting, and visiting here at Red Carpet Closet all of these months.  Thank you for all of your support!