Reminding Me Why I Love The Princess Diaries... 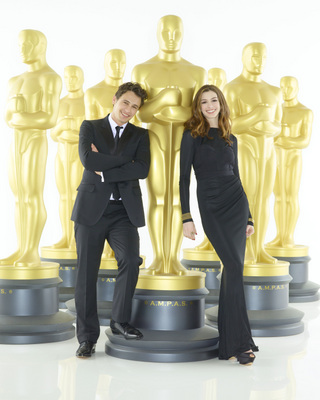 When The 83rd Annual Academy Award hosts were announced, I was initially lukewarm to the idea of having Anne Hathaway and James Franco lead the evening's events.  Yes, the Academy wants ratings, they want younger viewers, but most importantly, they need to shake the formulaic formula up.  A good way to do that is to change up the expected idea of a host.  We expect comedians, but it is a night that the entertainment industry takes very seriously.  What we saw Ricky Gervais do at The Golden Globes this year would never be done at the Oscars.  So, often times, comedians can't be funny in the way we expect/want them to be.  So, enter James Franco and Anne Hathaway and the new promos for the upcoming show.  The first piece is my favorite, but watch Anne's outfits in the promos, they scream Rachel Zoe all the way.  I am "bananas" waiting to see Anne's entrance on the red carpet on February 27th as I'm sure a pregnant Rachel Zoe will hold off on childbirth just to see her client's big moment.   Either way, the promos are well-produced which I think is a good sign for this year's Academy Awards. (And I reminder that The Princess Diaries is a classic to watch on TBS over and over again. Long Live, Princess Mia of Genovia!)

What do you think of this year's hosts?