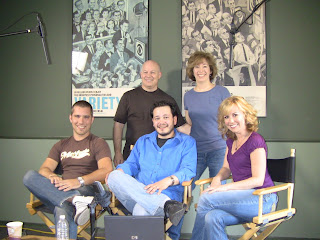 It's a week of celebrations for our friends at Movies You May Have Missed as they celebrate their one year anniversary. The Web Files was able to interview Juan Bagnell and Lee Buckley last year and it was our first crossover episode. I appeared on their show and they appeared on ours. Be sure to check out their anniversary show filled with fun clips of the last twelve months. I am thrilled to make a cameo too! Congratulations, Juan, Lee, and the muscle behind the camera, Marie Bagnell.

Although this wasn't planned, our latest episode of The Web Files also features a movie review show called Stupid for Movies. I will have a behind the scenes blog up soon, but check out the episode with Mike Rotman, Wade Major, and Mark Keizer. I hope you enjoy the episode as much as I enjoyed filming it.


Web Series Today also wrote a nice feature on our latest episode. (And uh....a "feature" on my T-shirt.) Be sure to stop by, the site has had some great discussions and debates about the current web space lately.

From entertainment to fuel cell, I am always thrilled when I have the opportunity to represent the Advanced Technologies team at Toyota, so my two days at the National Hydrogen Association Expo was no exception. Governor Arnold Schwarzenegger stopped by the Toyota area to check out the latest concept in fuel cell, the FCHV-adv. He is constantly followed by a crowd of photographers and cameras, so it was a wild scene. I gave him the highlights of the technology and he asked some great questions. Then he posed by the Power Control Unit, a great photo op for Toyota and the Governor knows exactly what he is doing in those photos. He is a master at publicity....oh, and he smells good too. (He joins the Wayans Brothers as some of the best smelling celebs in Hollywood. Is it weird to notice these things?)

The master of the perfect publicity shot......Governor Schwarzenegger. However, I look like I am praying he will love the vehicle.  Photo courtesy of The Office of Governor Arnold Schwarzenegger. 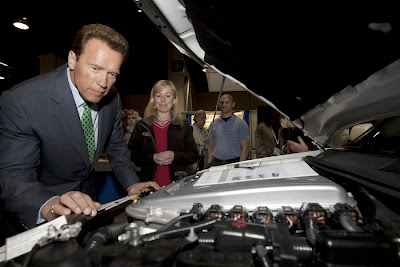 Me talking to the Governor about the FCHV-adv. Photo courtesy of Stephen Carr, The Long Beach Press-Telegram 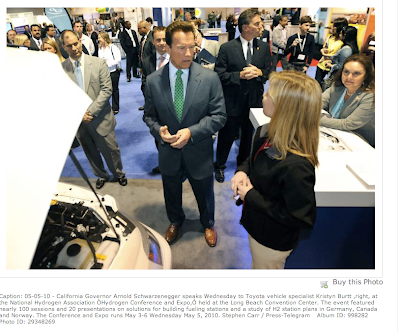 Finally, for the musical theatre geek out there:  check out Every Little Step.  It follows the casting of the Broadway revival of the legendary musical, A Chorus Line.  The documentary will make your heart soar and bring you to tears all in 93 minutes.  Watch it, talk to me about it, and bring out your inner geek!  I promise it will inspire you.
Posted by Kristyn Burtt at 10:34 PM