Guest blogging for Red Carpet Closet today is Director/Producer Sandra Payne. Check out her thoughts on Kevin Pollak:
A few weeks ago, I got a chance to meet actor/comedian and new media sensation Kevin Pollak, for the first time. So cool! After all, it’s not often that you get to meet someone in person that you usually only see after going to the theater, or popping a DVD in, or checking out a hot online show.
It was at the Streamy Craft Awards on April 7, where Kevin and his team won a Streamy Award for Best Live Production in a Web Series for Kevin Pollak’s Chat Show. He gave an enthusiastic speech:
surrounded by the production crew of his show, including director/producer Mike Rotman, writer/producer Jason McIntyre, and co-producer Josh Negrin (while writer/producer Jaime Fox waved from the comfort of her seat). We also interviewed Kevin and his team, including executive producer Jason Calacanis, on the red carpet directly after the ceremony. Steeped in post-award euphoria, check out what they had to say about winning.
Since then, I’ve seen Kevin at least six more times at various events around Hollywoood.  It’s rather astonishing, really.
I haven’t even seen the majority of my good friends that much.
I’m starting to think of it as my own, livelier version of The Sixth Sense.

And so it was that just two days later, on Friday, April 9, I attended a round table discussion with Kevin at the offices of mPRm, a public relations firm that has several high-profile web series creators in its client roster. At this meeting, Kevin, who was joined by Babelgum’s Comedy Publisher, Amber J. Lawson, talked with bloggers about his new comedy, Vamped Out, which was set to launch on Babelgum the following Monday, April 12.
Vamped Out is a funny, sharply written mockumentary about a real vampire who, despite wanting to be an actor, can’t get cast in any of the vampire shows that currently proliferate in Hollywood.
Kevin co-created, co-wrote and stars in Vamped Out with Jason Antoon. The series also serves as Kevin’s directorial debut. It’s a role he’s wanted to tackle for some time. Having worked with some of the greatest directors of our time over the years has allowed him to study them, he said, but prior to his web series, he’d been intimidated by the thought of being in charge of everything. Not any more, though.
“I’m definitely hooked for life,” Kevin said.
And not just on directing.
“I hope to do more episodes of Vamped Out,” he said. “The abject creative freedom and control is not to be taken lightly by someone like myself.”
Case in point, Kevin said that Vamped Out was conceived of, written, produced and launched in about 5 months.
In the world of high-quality Hollywood productions, that’s as close to instant gratification as you can get. It’s truly one of the most powerful draws of working on the web.
If you haven’t seen it yet, it’s worth checking out. Here’s the link: Babelgum. You can watch Episode #1 here:
After the roundtable discussion wrapped up, Vamped Out premiered at Cinespace that evening to a packed house, a red carpet, and celebrities. Naturally, Kevin was there to introduce his series. We watched a sneak peek of several episodes before their official launch on Babelgum slated for the following Monday. Since standard op is to watch web series alone at our computers, it was fun to see Vamped Out with a live audience on the big screen and hear everyone’s laughter.
Less than 48 hours later, I saw Kevin again at the Streamy Awards where he walked the Red Carpet:
That night, he presented the Streamy Award for Best Guest Star in a Web Series.
He got a lot of laughs when he said that being asked to act in a friend’s web series is the new jury duty. Of course, since jury duty pays about $15 per day, it’s kind of like that, but generally less lucrative.
Astonishingly, several weeks then went by for me without a Kevin Pollak sighting.  That was remedied on May 3 at the Digital Hollywood conference, Kevin was back and serving—I mean seated—as a panelist on the “Web Video: The New Content Creators” panel along with Illeana Douglas from Easy to Assemble, Chris McCaleb from the Big Fantastic, Brian Firenzi from 5-Second Films, and Jason Goldberg from Ashton Kutcher’s production company, Katalyst. The panel was moderated by Dana Harris, the editor of strategic projects for Variety.

Right after their discussion wrapped up, Kristyn had the chance to interview Kevin and Amber for today’s Buzz segment:

On Wednesday, May 5, Kevin appeared again on another panel. This time, it was one called “The Multi-Hyphenate: Actor-Writer-Director-facebook expert.” He was joined by three other creators: a) Joshua Malina, whose credits include The West Wing and Sports Night (I loved that show!), and who has a new web series coming out soon called Backwash, b) Brett Register of The Crew, and c) David Nett of Gold. 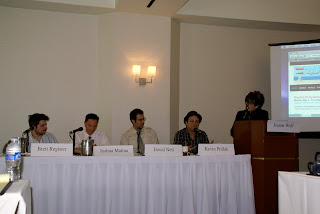 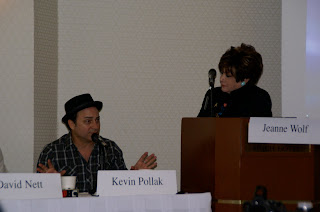 During the panel, Kevin said, “If you’re not creating, you’re waiting.” That, of course, caused me to spiral into a philosophical loop about what I was doing just sitting there.
Just when I thought my Kevin Pollak Palooza month was over, Tubefilter announced it’s Best of the Internet screening at the Egyptian Theatre in conjunction with the American Cinematheque Blows Up the Internet screening series. I had a play to attend that night, so I could only roll in as a small group of new mediarati was making their way over to the historic Musso & Frank’s Grill for an after-screening gathering. When I entered the restaurant, I saw Kevin.
[cue music from the Twilight Zone]
So there it is. Seven Kevin Pollack sightings in seven weeks.
Although it's tempting to attribute them to my Sixth Sense, I'm starting to think he's stalking me.