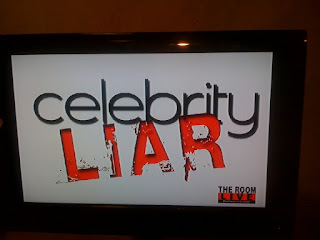 Last Tuesday, I had the opportunity to go and check out the online game show, Celebrity Liar.  The show is broadcast from a studio hidden in a building just off of Hollywood Boulevard.  I rang the buzzer, told them I was here for Celebrity Liar, and I was ushered down the hall to the secret studio where the online network, The Room Live, broadcasts their shows.  The Room Live, is the brainchild of Robin Ruzan and Michael Davis, who have worked on A-list projects and with top talent throughout their careers.  They are promoting the production of quality independent television without the constraints of a big corporate network. 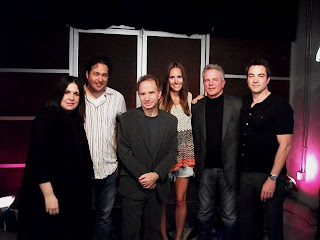 Inside I found the studio audience area made up of comfy couches with the talent, executive producers, and the audience all mixing and mingling before the show began.  A giant bowl of candy was offered up to anyone who needed a sugar fix to amp up before the night's proceedings.  I grabbed a handful of Gobstoppers just as the fun was about to begin!  The premise of Celebrity Liar is pretty simple:  "Two celebrities tell the same story as if it happened to each of them. In truth, it only happened to one of them, and the chat room decides.... Who's the Liar!!"  The show is hosted by the affable Andrew Hill Newman and co-hosted by the ridiculously fashionable Louise Roe who is the link between the studio and the chat room. 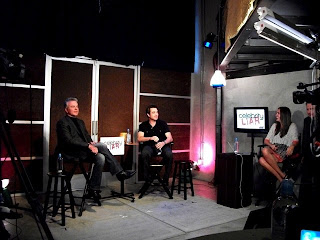 The night I was there, Jon Tenney and Tony Denison of TNT's The Closer stopped by to spin a yarn, lie, and win.  The stories are all told to the executive producers ahead of time in a sealed room.  The stars hear each other's story and so everyone is on the same page before the show begins.  We could hear the boisterous laughter from behind closed doors, so I knew I was in for a treat.  Round one began with a "Knock Yourself Out" story from college.  Jon began to tell the tale of his days at Vassar.  This is where my interactivity with the show began.  My ex-boyfriend is a Vassar grad and I figured he would be in the same age group as Jon.  I texted him, confirmed that Jon was a year ahead of him in school, and score.....I knew who was telling the truth.  Tony tried really hard to make that story his own, but I just didn't believe him.  Andrew, the host, also voted with Tony, but the audience at home was fooled and voted Jon as the liar.  Round one goes to Tony. 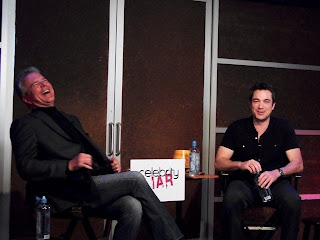 Round two begins, the story is randomly fished out of a bowl and it's entitled "Dying to Go to Mexico". Tony is up first and he stumbles his way through the story.  Jon takes his turn and smoothly recants the tale of his unfortunate trip south of the border.  The audience votes, Andrew votes, and an unprecedented 100% thinks Tony is lying, lying, lying,.  The truth is.....it was Tony's story! "I told the story exactly the way it happened.  I didn't even embellish it!", Tony exclaims.  We all burst out into  uproarious laughter.  Yep, round two goes to Jon. 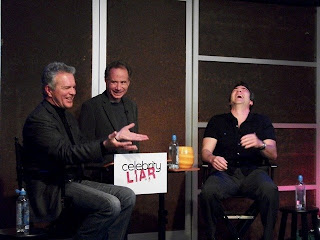 To break the tie, we hit the Lightning Round with True or Lie.  Tony and Jon have to guess whether certain statements are true or complete falsehoods about their opponent.  This is where the fun really peaks.  We learned the Jon not only had Rocky Mountain Spotted Fever, but that he got completely naked in front of Mary Tyler Moore and Vanessa Redgrave in a play eight times a week.  Tony divulged that he predicts earthquakes and he loses his balance when emergency vehicles with large sirens actually pass him on the street. (Um, wow, Tony!)  Jon manages to eek out a win by beating Tony five points to four points.  Phew, close game.   Each contestant is handed Lotto tickets for the charity of their choice with five chances given to the winner and one chance for the runner-up.

Celebrity Liar - Tony Denison VS Jon Tenney from The Room Live on Vimeo.
What a fun night!  A simple premise that promises laughter, creativity, and interactivity each week.  The best part is that you never know who is going to show up.  Prior guests have included heavy hitters like Matthew Perry, Kevin Pollak, Ed Begley, Jr., and Hank Azaria.  Each guest brings their own energy and personality to the room, so it plays like live theatre, you never know what type of show you are going to get. The best part for me is that I went back and watched the posted show almost a week later.  It still played as fresh and hilarious as when I watched it live.


Be sure to check out Celebrity Liar each Tuesday at 7PM PST/10PM EST at The Room Live.  Tonight's show features Jamie Kaler and Reid Scott of TBS' My Boys.

Posted by Kristyn Burtt at 9:00 AM