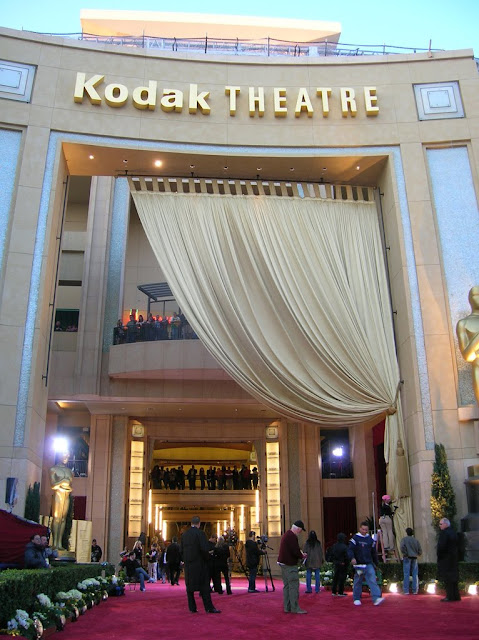 Yesterday was my last day on a media job that I have held for 4 years. It was a fantastic ride, but with my current schedule with The Web Files and a few other upcoming host gigs, it was going to be impossible to keep it all up. Believe it or not, this was a job I found off of Craig's List when I was at a crossroads in my career. 2005 was not a good booking year for me and I needed something to keep me in the host loop, earn me money, and keep me sane. Surprisingly, the job gave me so much more......amazing friendships, more Oscar knowledge than I could ever imagine, tons of laughter, tickets to the 79th Annual Academy Awards, and best of all.....my super cute BF. 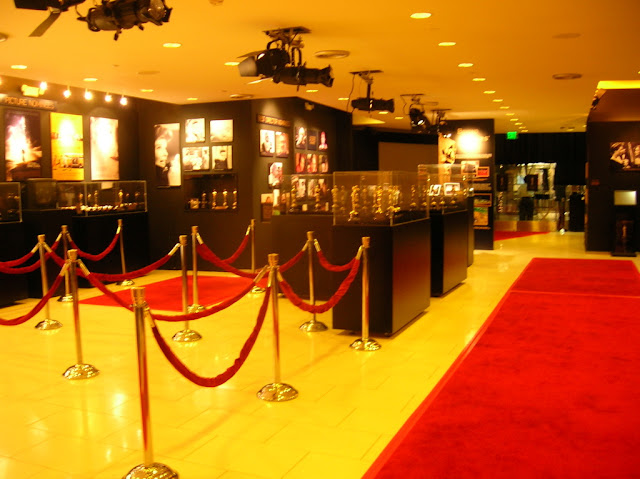 I know the Kodak Theatre inside and out. I took naps on the benches on the 4th floor after a few late nights out, Zen Gray and I used to chill our (non-alcoholic drinks) on the kegs in the bar area since we didn't have a fridge in the guide room, and we all spent many hours trying to find a wireless connection at Hollywood and Highland. I spent hours talking the ear off of one colleague, Dom, who really loved my incessant chatter despite the annoyance. :) The Kodak often gave us tickets to events when the house needed to be papered and Michael Bolton was the best of them all. Who else brings the entire cast of Desperate Housewives, screaming middle-aged women held back by security guards, and love ballads that you long forgot? One of the best nights ever after a few cocktails.

I did interviews for media outlets in Mexico, Japan, the US, and the UK. I filmed a piece as an Oscar expert that opened the live 80th Annual Academy Award show in Belgium. I talked about how heavy little Oscar was, what he was made of, where he was made, and how each winner got their name plate weeks after the show. 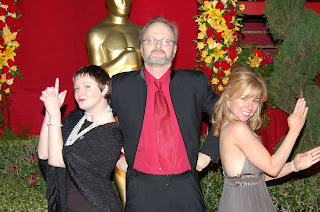 Post-show in 2007, everyone needs a Charlie's Angels pose.

When American Idol was exciting to me, it was thrilling to watch the set-up for the finals. I spent an afternoon listening to Tony Bennett rehearse for his concert from the front row of the theatre. I observed Lance Armstrong rehearse a monologue for the 2006 ESPY awards in flip-flops and shorts. Even better, Steven Spielberg and Catherine Zeta Jones stopped by to practice their introduction to AFI's 2006 honoree, Sean Connery. 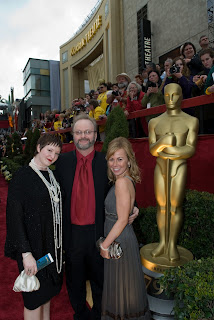 On the red carpet by the bleacher seats with friends, Ash and Brian

Best of all was my opportunity to work at AMPAS' Meet the Oscars exhibit from 2006-2008. There, I met the most amazing people who continue to play a huge part in my life. Nothing like the excitement that builds with each week of Oscar madness. The red carpet goes up, the flowers, and then the statuettes move in. It was magic, especially for an Oscar geek. Oh, and when I attended the Academy Awards in 2007, I managed to get my photo in People magazine. Okay, so they were taking a picture of former Vice President Al Gore and family and the photo ran months later after his son, Al Gore III, was arrested for speeding in a Prius, but hey, I made it to People! 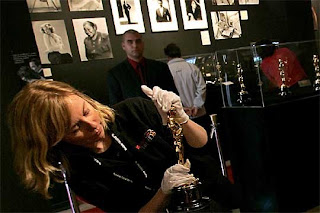 An Associated Press photo of me polishing Oscar in 2006.

So, good times behind me, but even better times ahead. Thanks to Crabby, Ash, Dom, James, John, Sarah, Zen, Ro, Tiffany, and Seth who made my time there so incredible. KB has officially left the building! 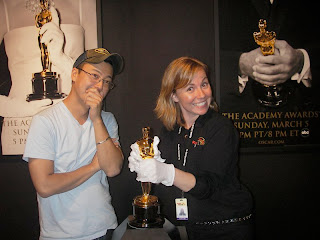 It takes a lot of technique to polish Oscar correctly! :) 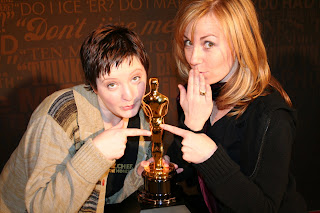 Pointing out some of Oscar's uh.....assets.

Posted by Kristyn Burtt at 7:58 AM