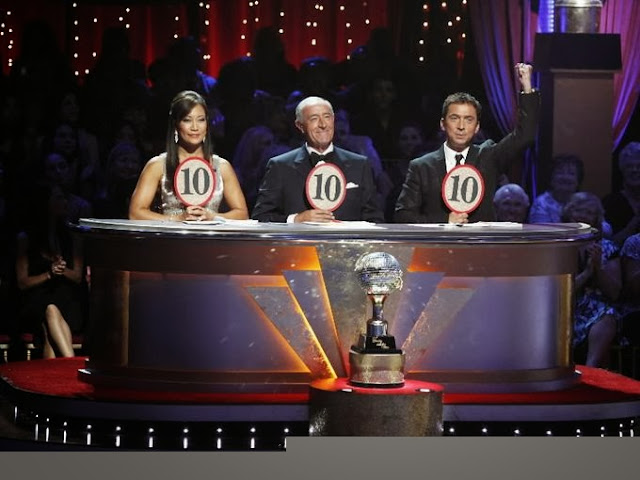 Let's chat about Dancing With the Stars voting. I'm frustrated and I know I'm not the only one. For some reason, Len has decided to take his TV antics to another level. We talked about it on last week's AfterBuzz show, but some of you think we are only bringing it up because it involves Derek Hough. That's actually not the case. It's not fair when it's done to any pro whether it was Maks or Val or Anna, who talked about her own experience in our Week 6 episode. In fact, I personally think Karina was the pro most battered in scoring by the inconsistent judging last week.

I don't even want to single out Len on this because Carrie Ann is also guilty of inconsistent scoring when it comes to lifts. It's all or nothing...you have to judge all pros the same. With the direction these two are going, the dance is becoming solely about the pro and not about the celeb.

I have no problem with the pros being judged on their choreography since I believe their creativity and talent can bring out the best in their celeb. If the pro has an off-week in the studio, the celeb usually does. Look at the difference with someone like Leah in Week 5 versus Week 6. A better choreographed routine makes a world of difference no matter how strong the celeb is as a dancer. With that said, the celeb also needs constructive feedback each week to know how they can improve. The judges need to find a balance somehow. Right now, Bruno is looking like the only rational one on the panel. How is that even possible?

Since I'm not the only one who has been frustrated by the judging panel this season, I was brainstorming about how to fix this mess outside of the obvious thought of getting new judges for the show. 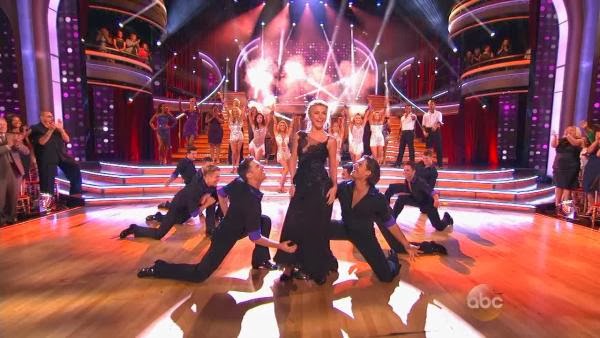 1. If you want to stick to ballroom rules, then require the pro to follow certain guidelines with each dance. The list of elements would also be disclosed to the judges and the viewers. This would cut down on the inconsistent scoring since the judges and the pros would know what to follow.  I also think this is a boring choice.

2. Have DWTS finally admit that the dances are a freestyle version of ballroom and other forms of dance. Allow the pros to imagine a dance to its full potential instead of worrying about Carrie Ann calling out a lift or Len arguing over repetitive movement. This idea makes me more excited about what all of the pros could come up with. You want to get nominated for an Emmy? This is a direction that has limitless potential.

While neither of these options will ever be executed, a girl can dream.

As for this week's surprise announcement, I'm going for a guest judge. Maks would probably be a good guess. (And he is in LA right now...hmmm, wonder why?)  It would also balance out the Julianne/Mark/Derek factor with the Dance With Me Studio crew.

Let me know your thoughts on the judging issues on DWTS...how would you fix the show?

See you all on Tuesday on AfterBuzz TV!
Posted by Kristyn Burtt at 9:52 AM