I'm back in LA and I am full of jet lag.  I am writing this at 3AM since I just can't sleep.  It's Noon to my body, so I actually want lunch.  Unfortunately, I have been gone for three weeks (New Jersey, then Europe), so the cupboard is bare.  I am really tempted to watch my DVR filled with the Real Housewives series, but I know it's going to involve a lot of screaming and yelling over wine.  Instead, I am writing this post in the peace and quiet of middle of the night.

While I was away, the amazing Jackie Kashian posted our interview for her awesome show, The Dork Forest, where we talked about my love for the Olympics.  I listened to the podcast on the train ride from Munich to Prague just days after I had visited the Munich Olympics site and the Dachau Memorial site. So, here is some supplemental reading/viewing if you listened to my interview.

While I was overseas, someone tweeted me the link for an incredible Oscar-winning documentary about the Munich Massacre called, One Day In September.  It's hard to watch, but it is a moving account of how and why this event happened.  The documentary is about 90 minutes long, but it is so compelling.  If you don't think that politics has a place at the Olympics, think again.  It will always play a part in the Games.  In fact, politics played a huge hand in this year's Opening Ceremony when the IOC refused to have a moment of silence for the 11 Israeli athletes to honor the 40th Anniversary because they felt it favored the Israeli nation over the Palestinian nation that also lost citizens that day.  Um, they lost terrorists.  Israel lost athletes and coaches.  It's sick, but it's true and I spoke with a man from Palestine while I was at the ESC Congress, and let me tell you, they don't like the US for siding with Israel.  He made it very clear to me in a conversation that was unprompted by me.  He knew I was American and started laying into Obama within minutes of meeting each other. Say what you want about Democrats versus Republicans, but this was a conversation about how a country views Americans.  Scary.

Also, I picked up a book on the 1936 Berlin Summer Olympics while I was in Germany which explains Hitler's role in the Games.  It's a fascinating look at how global politics played into the rise of Nazi Germany in what became a "coming out party" for Hilter at those Summer Games.  If you read the book first, you will see how the 1936 Games were a big factor in the decisions made in the 1972 Munich Games.  It's hard to imagine how one would affect the other, but if you are an Olympics history  buff, read/watch in this order.  I would love to hear your thoughts on the documentary, the book, and my interview!

September 5, 2012 marks the 40th Anniversary of the Munich Massacre.  The athletes and coaches from Israel represented the best in their sport in their country.  Their lives should not be forgotten. 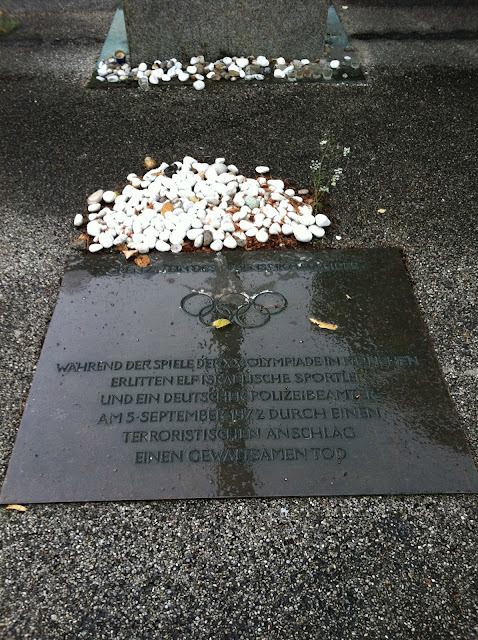 Posted by Kristyn Burtt at 4:14 AM