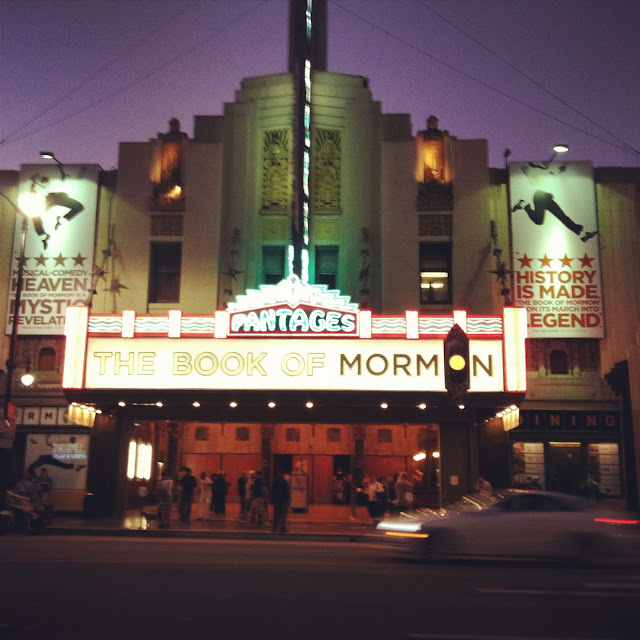 After all of my hard work this week, I promise I did have fun.....The Book of Mormon at the Pantages was just the kind of dirty laughs I needed!

What a week it has been!  I've been all over the place working and talking about the Emmys plus wrapping up a long season of SYTYCD.  In order to keep everything straight for me and for you, here is where you can find all of my entertainment scoop from the week. You can pick and choose your adventures along the way.  You guys are awesome and I appreciate all of the support.  It's been a crazy ride to get here, but I feel like it is all coming together.  If you comment somewhere, let me know......I always respond back!

Spreecast:  Emmy Predictions in the Comedy and Drama Categories with me, AJ Gibson, and Stuart Brazell:

AfterBuzz TV: So You Think You Can Dance Finale with Emmy-Nominated choreographer, Spencer Liff.  This was my favorite broadcast all week because Spencer has done four Broadway shows.....I'm such a musical theatre nerd.

AfterBuzz TV:  The New Normal with me, AJ Gibson, Lauren Leonelli, and Anna Koppel.  We break down two episodes on a series I am not completely sold on yet.  There are an awful lot of stereotypes being thrown around here.  Do you agree? Watch here.

Spreecast: Behind the Red Carpet Live with Cheeks, creator of the online series, Husbands.  We did a lot of comparison between his show and The New Normal.  His show was created first and originally dubbed "the new normal" by This American Life back in October 2011.  Interesting, no?  Watch here.

SheKnows. com:  I began my first week on the job!  Here are a few of the articles I wrote:  Amanda Bynes is a mess, Demi Moore is a mess, and oh yeah, Chad Johnson is too.

Tom Barnard Podcast:  Tom is a legendary broadcaster in the Minnesota area and I was fortunate enough to make an appearance on his show this week talking all about Emmys Week.  You can listen here and I will hopefully be on another show soon.

I will be covering the Emmys official gifting suite this weekend plus I'm off to the NBC, HBO, and The Awards Lounge parties, so follow me on Instagram:  @KristynBurtt, Twitter, or Facebook for all of the updates.