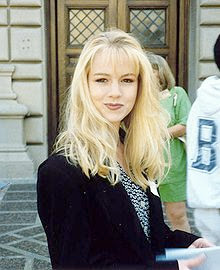 I had a really fun Monday which began with an interview with Jennie Garth.  How can you not love the original Peach Pit during the Brenda Years?  I loved everything about Kelly Taylor and Dylan McKay during that summer season when Brenda went to Paris.  Fast forward to 2011 when I get the opportunity to interview Jennie Garth for Starpulse.  In 2009, I interviewed former Executive Producer/Show Runner for 90210 , Charles Rosin, who gave me the inside scoop on what it was like to work on that set with all of the hottest TV actors of the 90's. He had some wonderful things to say about Jennie, so I was excited to start out my week with her.  I hope you check out the short article and video interview on the Starpulse page here.