Behind the Scenes of The Web Files Buzz, Episode 7 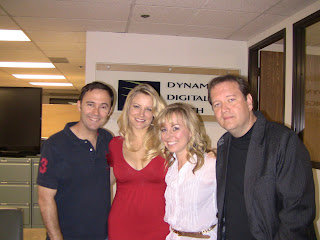 I think this has to our most unique Buzz episode of The Web Files because it was our first tech Buzz.  It was really important for us to feature some of the new technologies that are not only emerging on film, but they are happening in the web series world.   The crew at Safety Geeks:SVI and Yabazam.com have lead the way with the first 3D web series while Tyler Malin and Matthew Forrest at Social Animal are pioneering new technology by partnering up with Psychic Bunny for their new web series, Qualia.  Now, let's dig into this episode.

Dave Beeler and Tom Konkle saw the new Acer 3D laptop and knew that this technology would be a good fit for their series, Safety Geeks:SVI.  This forward-thinking duo ultimately created the first 3D web series on the market, something the studios have not even done yet.  It is truly impressive when you think of it on that grand scale.  The way they shoot their series already leant itself to making the 3D possibility happen easier than most shows.  Since everything is done in layers on green screen, the foundation was already there.  In fact, we talked at length about this in our original Web Files interview with them last summer.  Guiding the way to make this happen is Dynamic Digital Depth (DDD) and their website Yabazam.com.  Jay Wiskerchen, VP of Technical Operations, talked about a "shortage of content" for 3D and how they would love the opportunity to work with other web series creators.  Do you hear that?  A great opportunity for those looking to step outside the box of web series content. 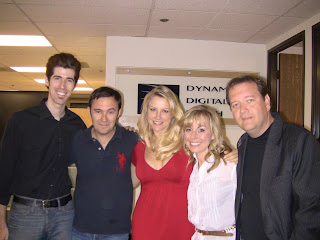 You might also notice that Jay is tall, like super tall.  They actually had to have me stand on an apple box to even remotely match eye lines for the shot.  Be sure to watch the episode to the very end where you catch a glimpse at the height difference.  In true Red Carpet Closet form, we also have some exclusive footage from the episode.  What is the cast's favorite scene in 3D?  Tom and Dave give some great technical scenes to look at while Brittney Powell goes right for the dirty.  I mean, the word is funny!

After our turn at DDD, we headed over to Social Animal to check out this wild 360 degree camera we had seen at the Streamy Awards red carpet.  The footage from the awards show was never released, so we decided to check it out for ourselves.  Tyler Malin, CEO of Social Animal, and Matthew Forrest, COO, gave us a great rundown of how the camera works and the new possibilities in storytelling the camera offers.  Matthew talked about the nine cameras giving you the "ultimate point of view" because you can pick and choose where you want the story to go.  So the viewer ultimately has control over their own experience and they wind up spending more time with your content.  This model has been used primarily in advertising with companies like Scion and Zipfizz, but they announced on The Web Files that they have partnered up with Psychic Bunny to use this in a new narrative web series, Qualia.  You might be familiar with Psychic Bunny's work from their unique comedy, Coma, Period and our Web Files interview with them.  While this technology is expensive, this is another groundbreaking look at the future of filmmaking. 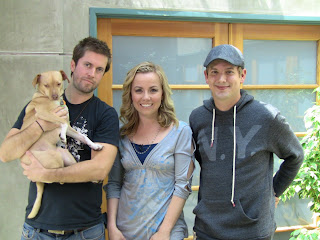 I hope all of the creators out there seize these amazing opportunities that are on the horizon.  These are great ways to stand out amongst a crowded field and help take web series to another level.  Pass this episode along to your friends and fellow artists.  I think it is the strongest Buzz episode we have created to date.  I hope you enjoy as much as I did covering the story:

I'm going to leave you with the talented puppy of Social Animal's Matthew Forrest.  Howwe wowed us with his tricks and it is a great excuse to upload a video to YouTube with a "cute puppy" tag.  May I present, the scene stealer of the day, Howwe:

PS If you want more Brittney, go buy the Safety Geeks:SVI calendar:
Posted by Kristyn Burtt at 11:04 AM